The renewal of the war 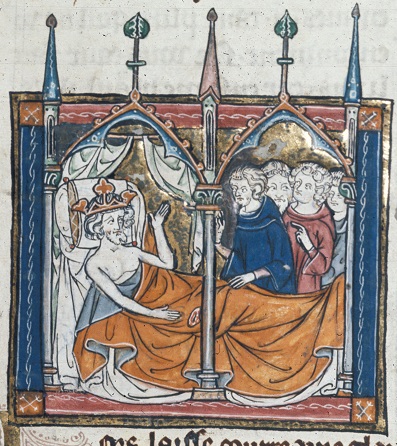 We have so far paid little attention to the only vernacular chronicle source to offer a detailed narrative of events at this time: the so-called 'Anonymous of Béthune'. Written in the circle of Robert of Béthune and the King's Flemish mercenaries, this text, having recounted the story of the siege of Exeter in May 1215, reports the outcome of negotiations at Runnymede (here located at Staines), described in some detail as a 'wicked peace' ('la vilaine pais'). The chronicler then tells how the Flemings went to the King at Marlborough (perhaps in the first week of July). There, the chronicler reports, the King committed a further 'great wickedness' ('une grant vilonnie'), taking a large part of his treasure from the tower of Marlborough but, instead of offering a penny of it to his Flemings, piling it up in his chamber, in sight of his Flemish knights, but reserving the entire pile for himself. The Flemings determined to return to their own lands. In England, meanwhile, faced with the arrogance of the twenty-five barons, who were prepared to demand the King's attendance even when the King himself declared himself sick and took to his bed, the King decided upon revenge. To this end, he sent to Rome for the Pope's assistance. It was the Pope's positive response to this appeal, so the chronicler alleges, that the barons reacted to by once again assembling in arms against the King.

As this summary should make plain, neither the chronology nor the motivation alleged by the Anonymous is necessarily reliable. He is nonetheless most valuable for various of the incidental details that he reports, not least in respect to Anglo-Flemish relations. Having entrusted the Queen and Henry, his son, to the safety of Corfe Castle, the Anonymous continues, the King travelled to Southampton with Richard, his younger son. There he issued letters to be carried overseas by a Flemish knight named Baldwin de Haverskerque (Nord, cant. Hazebrouck), addressed to Robert of Béthune and other Flemings. Travelling via Dover, Baldwin delivered his letters, of which the Anonymous supplies a summary, begging assistance against the barons. The King, meanwhile, having embarked from Southampton with Savaric de Mauléon and Hugh de Boves, sailed to Dover, from where Hugh was sent into Flanders with a large sum of money to recruit knights. The next that we hear of Hugh comes on 24 September, when, having waited on board ship at 'La Mue' (an unidentified point off the Flemish coast, possibly Calais, as specified by Roger of Wendover), without entering Flanders for fear of the King of France, Hugh once again embarked for England, carrying with him a large force of mercenaries recruited from Flanders and Brabant.1 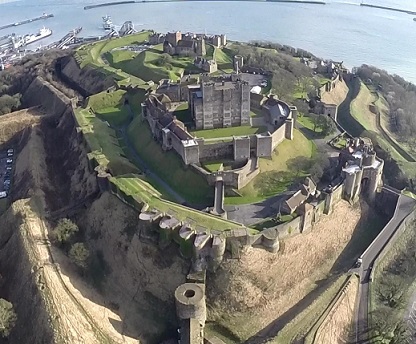 The broader outlines of this account tally with the evidence of the chancery rolls. After his maritime adventures of the previous week, and his arrival at Sandwich on or around Friday 28 August, the King moved southwards to Dover by Monday 1 September. There he was to wait for the next two weeks. The decision to land first at Sandwich (a port belonging to the monks of Canterbury and therefore a favoured point of departure and arrival for archbishops of Canterbury crossing the Channel) may have been determined by a desire to intercept the by now entirely compromised Archbishop Langton. In the event, it was at Dover, at some time after Saturday 5 September, that the King's clerical supporters passed sentence suspending Langton from his functions as archbishop.2 The suspension is unlikely to have occurred before Thursday of the week following, 10 September, on which day the King issued letters promising Langton, still accorded title as archbishop of Canterbury, protection for his castles, lands and men.3 Nonetheless, in the days immediately preceding this, the King's supporters were hard at work preparing the ground. On Friday 4 September, the King was at last persuaded to make a full and final settlement with his sister-in-law, Queen Berengaria, widow of King Richard I, over the dower that she claimed in England and France but that had been denied her for most of her widowhood since 1199.4 According to the terms of settlement now forwarded for Rome for papal confirmation, Berengaria was to receive an immediate payment of 2000 marks as arrears. Henceforth, in compensation for the dower lands in England, she would receive a further £1000 a year in two annual installments beginning on 1 November 1215. She was also to be permitted to pursue her claims to her dower in those parts of France no longer under the King's control, and to have free entry and exit for herself and her followers from any English port.5 In a distinct version to this settlement, it was agreed that Berengaria was to retain life possession of the city of Le Mans (held by her as a gift from Philip Augustus), even should the city in theory be restored to King John. She would likewise be restored to possession of the castles of Segré (Maine-et-Loire) and Mervent (Vendée, cant. Fontenay-le-Comte) should these come once again into King John's possession.6 The knight, Geoffrey Lutterell, swore on the King's behalf to the observation of these terms, under a clause allowing that the King's failure to comply, within forty days, would result in the immediate and definitive restoration to Berengaria of her entire dower land in England.7 Amongst the witnesses to this settlement we find Peter des Roches bishop of Winchester, the Italians Simon of Apulia bishop of Exeter and Master Pandulf bishop-elect of Norwich, and the diplomats Hugh abbot of Beaulieu and Alan Martel, master of the Templars.8

On the following day, Saturday 5 September, Master Pandulf, Bishop Des Roches, and Simon abbot of Reading, the three papal commissioners appointed on 7 July to enforce sentence of excommunication against the rebels, issued a lengthy instrument, addressed to Archbishop Langton and his suffragans. Having recited in full the papal letters of 7 July, the three commissioners then offered a highly partisan account of the recent rebellion led, so they specified, by 'the noble men' ('nobiles viri') Robert fitz Walter ('who calls himself "Marshal of the army of God"'), the earls of Winchester, Clare and Gloucester, Eustace de Vescy, Richard de Percy, John de Lacy constable of Chester, William de Aubigny of Belvoir and William de Mowbray. Ignoring a 'triple form of peace' ('triplex forma pacis') itself instituted by the Pope, these men and their co-conspirators had moved in arms against the King. Throwing off their oaths of fealty, they had seized the city of London, previously 'the very head of the King's crown and realm' ('corone pariter et regni sui caput'). In consenting to this, the Londoners themselves had committed the crime of perjury ('non sine reatu periurii'). Since then, and in unprecedented fashion, the rebels had given away lands, overturned the approved customs of the realm, and made new laws ('terras donent, consuetudines regni approbatas euacuent, noua iura constituant'). Since they would heed no correction from the Pope, and in defence of a King now committed to the Crusade, the commissioners hereby demanded public and regular sentence of excommunication to be pronounced against the rebels and their supporters. The city and men of London were to be placed under interdict save for the sacraments of baptism and viaticum. Specific sentence of excommunication was hereby pronounced against six of the rebels' clerical supporters: Giles 'so-called' bishop of Hereford, William archdeacon of Hereford (brother of Robert fitz Walter), Alexander the clerk, Osbert of Seamer (chaplain of Richard de Percy), John of Ferriby (clerk of Eustace de Vescy) and R. chaplain of Robert fitz Walter, the last (or possibly several) of whom had been responsible for delivering the sentence of diffidation against the King, 'with polluted lips', early in May 1215.9 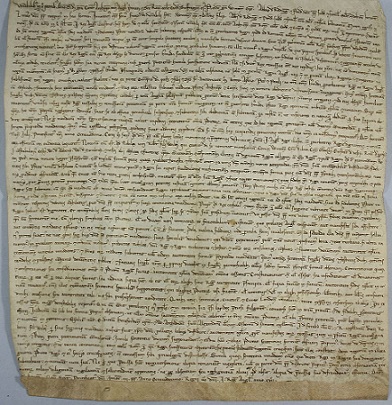 Unknown until its rediscovery amongst the archives of Canterbury Cathedral in the late 1920s, this letter of 5 September supplies not only a ringing denunciation of the rebels, couched in the highest ecclesiastical language of Bible and canon law, but a necessary preliminary to the suspension from office of archbishop Langton for non-enforcement of its sentences, almost immediately afterwards.10 It is surely no coincidence that the commissioners' letters were issued on 5 September, the same day on which the chancery Close Roll records a letter from the King to William Brewer at Winchester, requiring Brewer to admit Ralph Gernun and three other knights as members of his garrison 'so long as the war lasts' ('quamdiu guerra fuerit'): the first specific reference to a state of war since the peace secured at Runnymede on or around 19-20 June.11 After only eleven weeks of peace, in the King's eyes at least, King and barons were once again at war.

As for the other business transacted this week, we find a series of mandates for the restoration of the Poitevin count of Aumale, William de Forz, to his estates in the north.12 The count was himself amongst the witnesses to the only royal charter recorded this week, confirming land at Dover to the local reeve, Solomon son of Lethelin of Dover.13 Other foreigners also received favours. Master Pandulf, the Pope's familiar, and a crucial player in the moves both against the rebels and against Archbishop Langton, was granted timber with which to repair his houses at Chichester.14 Savaric de Mauléon, whom the Anonymous of Béthune claims accompanied King John on his sea journey from Corfe to Dover, was once again assured the right to strike his own coins as currency acceptable throughout Aquitaine.15 A hostage was restored to the Lusignan lord, and former enemy of 1214, Ralph de Issoudun.16 As count of Eu, Ralph was of potentially great significance in Anglo-Norman relations. So too was another Norman, John of Préaux, who in 1214 seems to have made tentative approaches to the court of King John and who was now restored to estates in Kent, Gloucestershire and elsewhere, confiscated from him and his wife since the loss of Normandy in 1204.17 Once again, it is interesting to find Normans here, as much as Poitevins or Flemings, encouraged to rally to the allegiance of King John.

Elsewhere, there were favours for the earl of Chester and for Master Simon the King's cook.18 In the far west, William of Wrotham, archdeacon of Taunton, was commanded to grant custody of the Devon castle of Lydford to William Espec.19 On 30 August, the King acknowledged a fine of 600 marks and 10 palfreys made by the Cistercians of Dore in Herefordshire in return for a charter issued several weeks earlier.20 As the latest development in a dispute ongoing since at least September 1214, the bishop of London was ordered to grant his blessing to Mabilia of Bosham, newly elected abbess of Barking.21