The fall of Rochester Castle 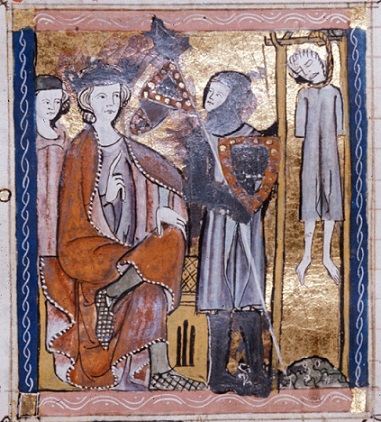 According to Roger of Wendover, who is the only chronicler to supply a precise date, the garrison of Rochester surrendered to the King on (Monday) 30 November, the feast day of St Andrew, all too appropriately the patron saint of Rochester Cathedral.1 Wendover, Coggeshall and the Crowland chronicler all report the the taking of the outer defences, the garrison's resort to desperate measures including the eating of their own valuable war horses, the mutilation of soldiers commanded to leave the keep for want of food, and the undermining first of the outer walls and then of one of the castle's four towers.2 It was generally supposed that the King was set on vengeance, both because of the number of his own men killed during the siege, and because of the cost he had incurred in paying his mercenaries (60,000 marks, according to Coggeshall, a surprisingly precise 55,051 according to Matthew Paris).3 At least one, and perhaps all of the crossbowmen in the keep were hanged.4 The serjeants there were handed over for ransom on behalf of the King's own serjeants.5 The knights and the more noble prisoners were retained for the King's own profit. William d'Aubigny, William of Lancaster, William of Eynsford, Thomas of Moulton, Osbert Giffard, Osbert of Boby, Odinel d'Aubigny and others were sent to Corfe. Robert de 'Chaurna' and Richard Giffard with Thomas of Lincoln were dispatched to Nottingham, and others to close confinement elsewhere.6 The King's plan to have William d'Aubigny hanged is said, by Roger of Wendover, to have been altered at the pleading of Savaric de Mauléon who pointed out that the war was not yet over and that, should the barons in future take Savaric or others prisoner, they might be tempted to deal just as harshly as the King had dealt with his own prisoners.7 On Friday 4 December, whilst the King was still at Rochester, he granted safe conducts to Nicholas of Belvoir and Agatha Trussebut, William d'Aubigny's wife, to come to talk with him before the coming Sunday (the feast of St Nicholas).8 On the following day, 5 December, similar letters of safe conduct were issued on behalf of Master Elias of Dereham, himself rector of Melton Mowbray near Belvoir, and steward of Archbishop Stephen Langton.9 This latter command might well be associated with the arrival of news of the suspension of Langton from office, pronounced by the Pope at the Lateran Council in November 1215 and thereafter communicated to England by Thomas of Erdington and Godfrey de Crowcombe, royal envoys to the council who are said to have arrived back in England shortly after the end of the siege of Rochester.10 Certainly, by 2 December, Thomas of Erdington was in receipt of mandates and favours relating to his usual stamping grounds in the north Midlands.11 On 2 December, the King also wrote to William Brewer commanding the felling of 100 trees with which to strengthen the towers and parapets of Winchester, perhaps already intending that Winchester would be his next port of call, after he and his army had departed from Kent.12 On 5 December, and after nearly nine weeks, he left Rochester in the direction of Malling and the Medway.13 In the meantime, and despite his successful prosecution of the siege, rebel land continued to be seized and entrusted to loyalists, the most important such transfers this week involving the confiscation of the estates of Geoffrey de Lucy and Henry d'Oilly, and their award to William Brewer and Engelard de Cigogné, in the first case with a claim by Brewer to hereditary possession.14 Elsewhere, John of Monmouth was appointed constable of the Marcher castle of Grosmont, and in Sussex was expected to ensure smooth transfer of the Braose castle at Bramber to its new keeper, Wilkelin Bloet.15 The wife of the rebel William de Cahaignes was promised custody of her portion of her husband's chattels.16 At Sandwich, the King's local commander, Roger the Templar received instructions over ships and 36 sacks of sumak ('cimak' - a flowering plant, whose ground fruit was used as spice) sold by the King to Odo, the King's carter, for export overseas.17 William, the King's tailor, was instructed to send the King a pair of silver basins 'because our basins have been lost', and to make a further two or three items, perhaps padded tunics ('acotimos').18 Baldwin of Newport, apparently a mercenary, was promised a mail coat and other items of armour.19