Rochester is garrisoned by the rebels

Having been warned of the rebel occupation of Rochester, the King moved westwards from Canterbury, as far as Newington along Watling Street, only eight or nine miles from Rochester. From there, he turned south, crossing the Downs and the river Medway. By the feast of Michaelmas, Tuesday 29 September, he had arrived at Malling, either East or West Malling, just to the west of Maidstone. It is presumably this same manoeuvre that is recorded by the 'Anonymous of Béthune'.1 Here, we are told, that having barricaded the streets of Canterbury, the King's first reaction to the news from Rochester was to flee back to Dover. This flight can perhaps be associated with John's first or second exercusion from Dover to Canterbury, either on 14 September or more likely from Sunday-Tuesday 20-22 September, whereafter he did indeed return to Dover, appearing at Canterbury again from Wednesday to Monday 23rd to 28th. According to the 'Anonymous', by this time Rochester itself had been garrissoned by the barons, with 100 knights placed under the command of William d'Aubigny of Belvoir, Thomas of Moulton, William of Eynesford, William of Avranches and another knight, named here as 'Aubiert Guifart', elsewhere identifiable as Osbert Giffard, later imprisoned for his part in Rochester's seizure.2 William of Eynsford, it is worth noting, had in June 1215 been amongst the four commissioners in Kent charged with enforcing the oaths to Magna Carta.

From Canterbury, the King now went 'beyond', as far as a place that the chronicler names as 'Antonne' or 'Autone', a vill near to the forest of 'Castegniers' or 'Castreigniers'. Marc Morris, who is the first modern scholar properly to have taken account of this report, has queried whether 'Antonne/Autone' might be an early form of the place-name Allington, later site of a significant castle on the Medway, west of Maidstone.3 In reality it should be identified as a corrupt and abbreviated rendering of (New)ington, where the King is indeed recorded on Monday 28 September and again from Friday to Sunday, 2-4 October. Newington, it should be noticed, lies immediately adjacent to a place today named Chestnut Street, itself no doubt to be associated with the 'Chestnut Wood' ('Castegniers/Castreigniers') to which the 'Anonymous' refers. The nearby parish church of Borden is described in a contemporary miracle story as lying 'in the territory of Canterbury near to the chestnut wood' ('ecclesia de Bordene in pago Cantuariensi iuxta castanarium').4

It was at Newington, according to the chronicler, that the King first received news of the drowning of Hugh de Boves. Here too he was attended by Robert de Béthune, Baldwin d'Aire and other scattered remnants of the mercenary force that Hugh had recruited, recently landed at Sandwich. Marc Morris is undoubtedly correct to point to the significance of this report as proof of a decision to lay siege to Rochester castle a full two weeks before the King himself arrived there on 13 October 1215.5

Independent confirmation of these events can be supplied from the chancery rolls. Here, on Sunday 27 September we find the King, as yet unaware of the shipwreck of his mercenary fleet, writing from Canterbury to Hugh de Boves and other Flemings.6 On the same day, letters reporting the dispatch of ships and messengers to Dunwich under the command of Ralph de Raleigh perhaps heralded the arrival, shortly thereafter, of news of Hugh's drowning on Dunwich sands.7 Hopes still lingered, however, since on Monday 28 September we find the King instructing Ranulf of Warham, keeper of the see of Norwich, to look to the landing of Hugh de Boves on the Norfolk coast.8 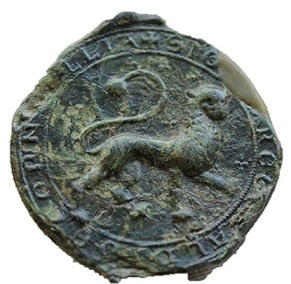 By the time that John was established at Newington on Friday 2 October, all such hopes had faded. It was here that the King granted Savaric de Mauléon the entire estate of Reginald of Cornhill, clearly confiscated for Reginald's part in the rebel seizure of Rochester.9 Other transfers of land made at Newington as early as 28 September can perhaps already be read as reprisals against known or suspected rebels. Thus Seasalter, on the north Kent coast, was taken from Thomas de Wadhal and granted to master Simon, the King's cook; William Parvus was granted land in Essex taken from Ralph Morell, and a Lincolnshire manor was confiscated from Robert of Ropsley and granted to master Roger, schoolmaster of the King's son Richard.10 At Malling, on 30 September, further confiscations are implied, with the transfer to Walter de Verdun of the Kent manors of Newnham and Norton, taken from Robert de Campaignes.11 By the 2-3 October, and besides his seizure of the estate of Reginald of Cornhill, the King was already lashing out against rebels, both small and great. Here we find orders for the confiscation of property from the obscure Bartholomew de Moriston, but also from much greater men: Eustace de Balliol, Geoffrey de Lucy, and from both Geoffrey de Mandeville earl of Essex and Saher de Quincy earl of Winchester.12 Thus began a process that, over the next two years, was to become a dominant preoccupation of the chancery enrolments, until the end of civil war increasingly given over to lists of estates and their transfer from rebels to royalists. Of those to benefit from this process, we already, by 2 October, find the King rewarding his supporters Savaric de Mauléon, William Talbot, Thomas Malesmains, Thomas of Sandford, Robert of Narford, and Richard (of Chilham), the King's bastard son.13

Perhaps to supply his foray towards Rochester, on 28 September, the King commanded Roger, his almoner, to send a barge ('sorneka') loaded with 10 measures of wine to the mouth of the Thames ('os Tamisie').14 From Newington, and having learned of the scattering of his Flemish mercenary force, on Friday 2 October, the King sent letters to the constables of his chief castles in the south and west (Bristol, Devizes, Winchester, Marlborough, Odiham, Sherborne, Dorchester, Windsor, Oxford and Berkhamsted) requesting that they receive and assist William earl of Salisbury in his effort to recruit as many members of their garrisons as could be spared for the King's needs.15