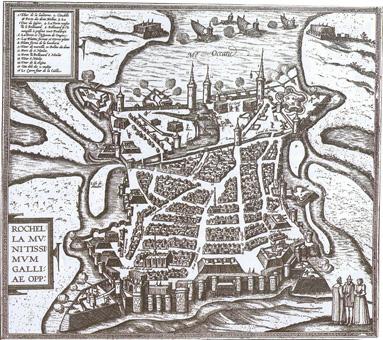 Having abandoned his position on the Loire, John went south to La Rochelle, travelling through a location that was perhaps Pouzauges on Saturday 5 July, certainly pausing at Mauzé-sur-le-Mignon on Monday on Tuesday 7-8 July before reaching La Rochelle on Wednesday 9 July.  He can have had little idea at this time that he would never again see Angers or his lands to the north.  Nonetheless, in his absence, Louis set about tearing down the walls that John had begun to construct around Angers, and retook the castle of Beaufort-en-Vallée, 30 kilometres further east.1  John's retreat from La Roche-aux-Moins was, in hindsight, to become one of the great turning points of the reign, and in consequence, of English history.  In May 1222, founding a new Augustinian abbey of Notre-Dame de la Victoire near Senlis to commemorate his triumphs, Philip Augustus dedicated the new foundation not only to his own victory at Bouvines in late July 1214, but to his son's at La Roche-aux-Moins three and a half weeks earlier.2  According to Matthew Paris, writing in the 1230s, the French took more encouragement from John's defeat at La Roche than from that of his allies at Bouvines, since they now realized that in Louis they had a prince prepared to lead them in battle.3  At the time, however, there is little to suggest the panic or chaos that French chroniclers attribute to the event.  There is nothing in the chancery rolls, for example, to suggest the negotiation of ransoms to pay for English knights captured at La Roche-aux-Moins.  Only in hindsight did the retreat from the Loire acquire its full significance.

Pausing at Mauzé on 7 July, the King granted a charter of privileges to the men of Dax in the far south of Gascony, renewing their quittance from custom as enjoyed in the time of kings Henry II and Richard I.  The charter is significant as much for its witness list as for its contents, revealing the presence at John's court of the bishop of Dax and Arnaud Raimond III, vicomte of Tartas, as well as of other prominent figures from the south.4  For these men to have encountered John in the midst of his flight from the Loire can hardly have helped to steady nerves.  On the same day, the men of Saintes were told to be obedient to Hugh de Lusignan in accordance with the terms of the King's earlier peace with the Lusignans: yet further evidence of the compromises that John was forced to make in order to maintain peace in the south.5  From La Rochelle after 9 July, now reunited with his treasure and the rump of his administration, the King issued a great flurry of letters, commanding action in France, England and Ireland.  Amidst the routine, and without any mention of the King's recent setbacks, we find letters that speak of John's disquiet.  There was continued anxiety, for example, over the Exchequer pensions owing to cardinals and other English representatives in Rome.  Amidst negotiations over the vacant bishoprics of Carlisle and Worcester, and with the ever-present threat of rapprochement between the Pope and Philip Augustus, it was essential that diplomatic channels to Rome remain open.6  There were presents for an envoy from the King of Norway, one of King John's chief allies in the north, and a particular command for the best possible gifts of grain, rings and brooches to be made to King Inge himself, 'since he has been so generous in his gift of jewels'.7

Routine instructions to the King's representatives in Gascony and Ireland, commanding the transfer of land, suggest particular caution in respect to local legal custom, promising that the King's courts would uphold the 'right customs of our land of Gascony' (rectas consuetudines terre nostre Wasonie) and respect for 'the custom of Ireland' (secundum consuetudinem terre nostre Hibernie).8 There were also delicate negotiations to be transacted, over the granting of the great Welsh Marcher estate of William fitz Alan to Thomas of Erdington, himself a major figure in John's diplomacy, and over the offer of a widow to Robert de Harcourt, brother of a major Anglo-Norman nobleman pivotal in the continued attempts to woo Normandy away from King Philip.  Even here, however, there was a degree of caution.  Robert de Harcourt sought marriage with the widow of Guy de Dives, but before this could be granted, the widow was to be asked whether she approved the match.9  What we find here is respect for a widow's own wishes, in many ways in accordance with the future clause 8 of Magna Carta, forbidding the King to marry off widows against their will.  Another instruction to England, concerning the fine offered by Roger de Mortimer for various lands in marriage, is scrupulous in forbidding any waste of the land of an heir in custody, again here predicting Magna Carta clause 4.10

By far the most evocative letter sent by the King during this week survives on the chancery Patent Roll.  Apparently sent from La Rochelle immediately after the King's safe return there on 9 July, it is worth translating in full:

'The King sends greetings to all his earls, barons, knights and other faithful men throughout the realm of England.  Know that we are in good health and uninjured, and that the grace and joy of God prosper amongst us.  We send repeated thanks to those of you who have dispatched your knights to us to serve in upholding and winning our rights, and we ask most attentively, just as you value our honour, that those of you who have not crossed over with us, come to us without delay to bring assistance to the winning of our land, all save for those who with the counsel of our venerable fathers P(eter) bishop of Winchester, our justiciar, J(ohn) bishop of Norwich, Master Richard Marsh and William Brewer, are to remain behind in England.  You should act here so that we are bound in permanent gratitude towards you.  Should any of you suspect that we harbour aindignation against hima, through coming to us he bmay repair thisb'12

This opens as a standard royal newsletter, intended to quieten rumour and to assure his subjects of the King's continued prosperity.  Reading between the lines however, a number of anxieties emerge.  Firstly, there was clearly an unspoken fear that the defeat at La Roche-aux-Moins might now breed panic.  Secondly, there was concern, and even anger ('rancour/indignation') that large numbers of English barons had failed to send service to the King in Poitou.  The redrafting of the final clauses of this letter (where 'rancour of soul' has been transformed into 'indignation', and complete remission into a mere possibility of forgiveness), all suggest less than confident dealing between King and barons.  As early as May 1214, the King's clerks had begun to compile lists of English landholders serving in Poitou, in order to establish who did and who did not still owe the scutage (or 'shield money' for knights) owing from those who did not render military service in person.  This 'scutage of Poitou' was charged at the relatively high rate of 3 marks per knight's fee.  The list of service, copied onto the back of the chancery Close Roll in May (regularly updated thereafter, through to the end of August), reveals that a large number of barons did indeed serve with the King.   Amongst the twenty-five barons specifically named in Magna Carta as leaders of the opposition, for example, at least six either served in Poitou in person or sent knights to represent them: William de Lanvallay, William of Huntingfield, Richard de Montfiquet and Geoffrey de Say apparently in person; Saher de Quincy earl of Winchester, via his son, and Roger Bigod earl of Norfolk, who sent knights.13  It was almost certainly because they had too close, rather than too warped, an experience of John's personal leadership that such men became increasingly critical of the King. Even so, taken in conjunction with the evidence of the Exchequer Pipe Roll, what the list of scutages reveals is that large numbers of barons not only failed to turn out in person (a decision apparently taken by no less than 19 of the 25 barons of Magna Carta) but refused to pay scutage on the fees for which they were in theory liable.14  In the aftermath of his defeat at La Roche-aux-Moins, the King might boast of prosperity, grace and joy.  In reality, his situation was increasingly perilous.