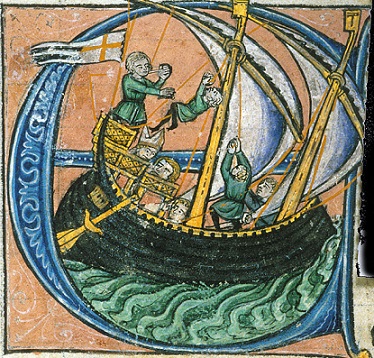 Following his appearance at Wareham, on the Purbeck peninsula, on Saturday 22 August, the King vanishes from the record for five days, with no letters whatsoever copied onto the chancery rolls. He reappears, on Friday 28 August, at Sandwich in Kent. Clearly, in the interim, he had set to sea. For what transpired here, we are once again reliant upon the chroniclers. We should begin here with the Crowland chronicler, who reports the return to London of the barons after the breaking up of the Oxford conference in mid August, and the departure of the bishops to Portsmouth to seek out the King. The King only reluctantly left his ship to speak with them, agreeing only that certain of his men might go under episcopal safe-conduct to the bishops and barons to protest that the King would do nothing further until peace were properly established. On 28 August, the bishops and barons gathered at Staines. There, after much discussion, and given the threat of suspension that otherwise hovered over the bishops, it was agreed to publish the papal sentence against disturbers of the King and his realm. Many people, so the chronicler alleges, claimed that this sentence should more correctly have been directed against the King as the true cause of trouble. The barons now divided up those parts of the realm that they controlled, assigning Essex to Geoffrey de Mandeville, Northamptonshire to Robert fitz Walter, Norfolk and Suffolk to Roger de Cressy, Cambridgeshire and Huntingdonshire to Saher de Quincy, Lincolnshire to William d'Aubigny, Yorkshire and Nottinghamshire to John de Lacy constable of Chester, and Northumberland to Robert de Ros, each of whom was made responsible for dispensing justice and ensuring peace within their individual provinces. At this point news reached them that the King, having escaped by sea, had summoned an army of foreigners ('alieni') to meet near Dover.1

Ralph of Coggeshall, whose chronicle has clearly been doctored at this point in such a way as to confuse the chronological sequence, refers immediately after the Runnymede settlement to the King's promise to attend a meeting at Staines, that in the event he failed to keep. This was presumably either the Oxford Council of mid-August or the meeting that the Crowland chronicler places at Staines a week later. Instead, Ralph tells us, the King put to sea, strengthening his fleet, summoning aliens to his cause, dispensing treasure that he taken on board ship, and appointing strict watch over the ports of Kent, Surrey (sic) and Hampshire to prevent anyone from setting out for the Pope's Council without royal approval. The fact that Coggeshall refers to 'Staines in Kent', and to the ports of (the land-locked county of) Surrey, are further details confirming that his account here has become garbled, much to the confusion of his editor, Joseph Stevenson, who attempted in a footnote to match up this account with the King's itinerary of late June and early July.2 In reality, the events described here are best placed, as by the Crowland chronicler, in late August.

Roger of Wendover, perhaps here drawing on a version of events very similar to that used by Coggeshall, supplies the most fanciful of all of these reports. The King, he states, after Runnymede and a troubled night at Windsor, fled to the Isle of Wight. There he passed three months, in virtual solitude save for the company of sailors. Meanwhile, rumours circulated that he had become either a fisherman, or a merchant pirate, abandoning the Christian faith altogether. In reality, so Wendover alleges, he passed his time in devising revenge against the barons, seeking the aid of the Pope, of the Cinque Ports and of foreign mercenaries summoned to gather at Dover for Michaelmas (29 September). Such foreigners were obliged to issue written sureties and to enter into contracts for military pay. In this business the King employed not only his most trusted ministers (Wendover here naming Walter de Gray the chancellor, John bishop of Norwich, Richard Marsh, William Gernun and Hugh de Boves), but his seal, sent overseas as a means of gathering military support.3 Once again, the factual errors here (John rather than Pandulf bishop of Norwich, Walter de Gray rather than Richard Marsh as chancellor) suggest detachment from factual reality, but not entirely from events. What we have here, albeit filtered through a source influenced at this point by wishful thinking (and perhaps by Lucan's account of Caesar on the eve of civil war), is a garbled version of the King's itinerary in late August 1215, when John did indeed travel along the south coast, from Purbeck, quite possibly via the Isle of Wight, to arrive in Sandwich by 28 August. The fleet that he took with him may well have been the same that we have found him assembling from the Cinque Ports as long ago as the final week of June: a fact that makes it all the more likely that Wendover (and Coggeshall) were here drawing upon a memory of real events.4

By the time that the King disembarked at Sandwich, there seems little doubt that he was preparing for war. On the first day that the chancery records resume, Friday 28 August, he wrote once again to the Master of the Templars in Poitou, reminding of him of his earlier request for a loan of 1000 marks to Richard Marsh, to pay for knights summoned to the King's service, and asking that Richard receive a further 300 marks for his expenses.5 The day after, he commanded William Brewer at Winchester to arrange payment of 40 marks for 96 measures of wine purchased from a merchant of Toulouse at Southampton and now to be brought to Dover.6 The quantity here suggests the mustering of very considerable force. Roger, the King's almoner, was to be supplied with a ship, sailing from Dover into France as the King's messenger. There were also orders for the reception of a knight into Winchester Castle, for Northampton Castle to be properly munitioned under Roger de Neville, and for the Braose castle at Bramber in Sussex to be entrusted to Ralph Tyrel.7 A resumption of warfare was now imminent.