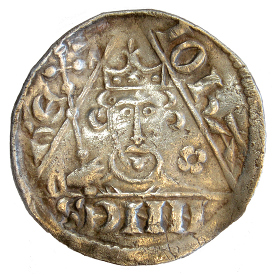 John was 33 years old in 1199 when he claimed the throne of England and the Angevin Empire. The youngest of four sons born to Eleanor of Aquitaine and Henry II (1154-89), he had grown up with little hope of wearing the crown. It was only with the death of his elder brothers, Henry the Young King and Geoffrey, and Richard’s coronation in 1189, that John’s ambitions were seriously stirred. When King Richard took a lethal blow from a crossbow bolt in 1199, John grabbed his chance. With the help of the ageing Queen Eleanor, he secured his continental domains and, in 1202, captured and imprisoned Prince Arthur of Brittany, the son of his brother Geoffrey and John’s rival for the throne. Arthur was later to disappear mysteriously and John would never escape the mutterings that he had murdered the lad in a fit of drunken rage.

King John, however, was neither the black-hearted villain nor the cowardly runt of Hollywood legend. He had rebelled against both his father and brother but had then come to serve King Richard well for a time. His behaviour could certainly be unsavoury: he snooped on his barons, applying blackmail when he uncovered marital indiscretions, and seemed to enjoy the discomfort of others. He made a poor husband: having abandoned his first wife, Isabella of Gloucester, he married the 12-year-old Isabella of Angouleme in order to secure a continental alliance, and both wives were forced to endure a string of mistresses. He could also stretch to outright cruelty, starving to death Matilda de Braose and her son when their family rebelled. But accounts of King John’s treatment of lesser subjects are tinged with mercy and even kindness. He listened with a sympathetic ear to the pleas of common folk brought before him and bought new dresses for the wives of his crossbowmen. One note in a government roll even catches him sending a chaplet of roses to a girlfriend. As a ruler, John was fiercely energetic, hustling hither and thither across his domains, raising cash or swiping at would-be rebels. But he possessed little of the physical courage or martial charisma that had won his brother the epithet ‘Lionheart.’ Instead, King John’s nicknames were ‘Lackland’ and ‘Softsword’.

The turning point in King John’s reign was the loss of Normandy to King Philip of France in 1204. It launched John, determined to raise the money needed to recover his continental inheritance, on a ruthless campaign of financial exploitation across England. Some of John’s measures hit ordinary people hard: he ordered sheriffs to raise more cash from their counties, cracked down on infringements of forest law in order to impose financial penalties, levied large taxes from the Jews (who were regarded as Crown property) and, in 1207, raised a tax on the general population of 13 per cent. The sums he raised were staggering. At around £49,000, his average annual income between 1207 and 1212 was double that of his brother and father even before the money he raised from taxation. In addition, John was able to raise vast amounts from the Church. Having rejected Pope Innocent III’s candidate for the archbishopric of Canterbury, the famed scholar Stephen Langton, John was excommunicated and England placed under an interdict. The punishment was somewhat softened, though, by the £100,000 John was able to wring from the lands of the exiled bishops (less than half of which he paid back).

Yet it was King John’s treatment of his barons that was to provoke rebellion and ultimately lead to Magna Carta. Henry II and Richard I had both made financial demands of their barons but John went much further. Jealous at their power and suspicious of their intentions, he tried to force the loyalty he could not win. He took theirs sons as hostages for good behaviour, charged hefty sums for having his ‘goodwill’ and pushed his feudal rights as far as they would stretch, naming exorbitant fees for heirs to enter their inheritance and extorting huge fines from widows claiming their property entitlements and pleading not to be forced to remarry. Before long, John’s behaviour was inviting the very rebellion he feared. His reputation suffered a further blow when his forces were comprehensively defeated by King Philip at Bouvines in July 1214, ending his hopes of recovering Normandy. Recognising his perilous position, King John opted to patch things up with the pope. He accepted Stephen Langton as archbishop of Canterbury and made himself a papal vassal. With the pope now condemning the rebellion and Langton trying to broker peace, John was in a much stronger position to face baronial demands. Thus the Charter of Runnymede, sealed by the king on 15 June 1215, was the result of a negotiated settlement, its terms far more lenient than they otherwise might have been. Yet the Charter still allowed for drastic action against the king: the suspicious barons had included a ‘security clause’ empowering 25 of their number to seize royal property if the king breached the Charter. John, however, was one step ahead and issued the Charter before his barons had added the names of the enforcers. Before long he had persuaded the pope to annul the Charter. The barons were having none of it. They invited the French king to invade England and take John’s throne, a prospect that seemed all the more likely when John died in October 1216, leaving an infant son and a kingdom wracked by civil war.

The prospects were bleak for a 9 year old Henry III (1216-72). More than half the kingdom was held by Prince Louis of France and royal finances were soon in tatters. King Henry was saved, though, by a band of able and energetic ministers (among them William Marshal, hailed as the greatest knight in Christendom). Through a combination of administrative nous and military prowess, they restored the young king’s dominion. In a political masterstroke, the minority council issued King John’s Charter of Runnymede in the name of Henry III, thus ripping the carpet from underneath the rebels’ feet, although the controversial ‘security clause’ was quietly omitted. In 1217, the council issued the Charter again, this time alongside a sister document, the Charter of the Forest (hence the Charter of Runnymede became Magna Carta, ‘the Great Charter’).

But arguably the most important moment in Magna Carta’s history came in 1225. It was then that Henry III issued the Charter freely in return for taxation, a mutual bargain between king and subjects, and it is this 1225 version of Magna Carta that was reissued several times in the thirteenth century and survives in the statue books today. It was also in 1225 that the Charter was buttressed with a means of enforcement lacking since the ‘security clause’ was dropped in 1216, as Stephen Langton stepped forward with his suffragan bishops to pronounce sentence of excommunication against anybody – even the king himself – who dared to break the Charter’s terms. The 1225 issue of Magna Carta was to set a new pattern for the king’s relationship with his subjects, whereby Henry had to stick to the Charter if he was to hope for financial support from the barons and knights who gathered in parliaments to discuss his policies. More radical proposals for political reform were propounded between 1258 and 1265 during the revolution led by Simon de Montfort but, succeeding his father in 1272, Edward I (1272-1307) restored royal authority and learned the lessons of his father’s reign. He confirmed Magna Carta in 1297 and again in 1300.