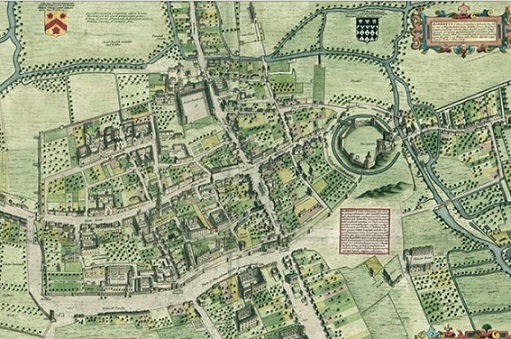 We have seen that in the week preceding this, the King went to great lengths to garrison his castles with foreign knights and crossbowmen. It was just such moves on his part that are said to have persuaded the barons to abandon any real hope of reconciliation and, even before the deadline set for the Northampton meeting scheduled for 26 April, to prepare for war. If the chronology here remains uncertain, then the court held at Oxford from 7 to 13 April seems to have marked a crucial turning point along the road to baronial revolt. That the King was already apprehensive can perhaps be established from his movements as well as from his actions. His decision to divert his itinerary westwards from Kenilworth, approaching Woodstock and Oxford not via the direct road but via Chipping Campden, may suggest deliberate avoidance of the vicinity of Banbury and Brackley, in due course major centres of rebel activity. En route, at Campden on 5 April, he authorised the release of a further Welsh hostage, previously held at Richmond as security for the good behaviour of Gwynwynwyn of Powys.1 At Woodstock, the following day, he issued instructions for the reimbursement of expenses incurred in the munitioning of Northampton castle.2 He also commanded the manufacture of five tunics and five banners, all of them embellished with the King's arms in gold, apparently for the use of royal heralds. These were probably not war standards, but intended as a means of advertising the King's presence and majesty, either on his arrival in Oxford, or more likely for his return a week later to the Easter festivities in London.3

Established at Oxford from Tuesday 7 April until the following Monday, the King engaged in a great flurry of administrative activity. At least two ecclesiastical causes had drawn him to Oxford. In the first, he lent his support to the continued attachment of Glastonbury Abbey to the bishopric of Bath, appointing his confidential clerk, Henry de Vere, to represent royal interests before the papal judges appointed to the case. That the King went to great lengths to observe procedural niceties here is suggested by the address of his letters on the matter to Nicholas bishop of Tusculum and (Richard Poer) dean of Salisbury as two of the three papal judges. In reality, Nicholas of Tusculum had left England nearly five months earlier, and Richard Poer was no longer dean of Salisbury but bishop of Chichester.4 The failure of the King's letters to recognize these facts was the result not of oversight but of deliberate adherence to legal form.5 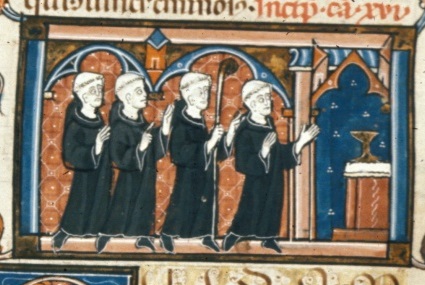 In the second great cause, the King continued to resist the recognition of Hugh of Northwold as abbot-elect of Bury St Edmunds. In theory, Hugh's promotion had been confirmed by papal judges delegate on 10 or 11 March, whereafter, as abbot-elect and with the permission of Archbishop Langton, Hugh had approached the King in Sherwood outside Nottingham, in the last week of March.6 Kneeling before the King, Hugh had been addressed by him as abbot-elect but received no firm promises, save to be told to consult with William Brewer. Brewer, in turn, had advised him to attend at 'the council which is to be held with barons and magnates over various difficult matters at Oxford from Monday, two days after the feast of St Ambrose (i.e. 6 April)'.7 At Oxford, Hugh joined a company that included archbishop Langton, the earl of Salisbury, the bishop of Winchester, Richard Marsh, William Brewer and 'other great lords', all of whom are said to have interceded on his behalf.8 The King, however, insisted that Hugh pay a certain (unspecified) sum of money before his election could be officially accepted. This, with the archbishop's advice, Hugh refused. The King then declared that he had sent messengers to the Pope to complain against all elections held in England 'contrary to my liberties' (ad derogacionem libertatum mearum), suspending any further decision on Hugh's case until his wider appeal had been resolved.9 The King's appeal here to his 'liberties' is worthy of notice, as is the aftermath in which Hugh returned to Bury, arriving by Good Friday (17 April). There he found Luke bishop of Evreux (1203-1220) preparing to ordain various of the Bury monks.10 The see of Evreux possessed property near Bury, including the manor of Bramford near Ipswich, confirmed to Evreux Cathedral most recently in a charter issued by King John in March 1208.11 What is remarkable here is to find a leading Norman bishop, even at a time of heightened Anglo-French tension, performing routine functions in an English setting.

Other ecclesiastical issues were discussed at Oxford. The prior of Bermondsey was dispatched overseas as the King's ambassador, perhaps to Rome, perhaps on the general appeal over elections to which the Bury chronicler alludes.12 As yet, the King is unlikely to have learned of the outcome of negotiations in Rome headed by Walter Mauclerk, or of the fact that on 19 March, the Pope had explicitly condemned baronial conspiracies in England, rebuking Archbishop Langton for offering the malcontents support and counsel.13 Having on 30 March confirmed the King's charter of free elections, on 1 April the Pope went on to demand that the barons pay the scutage being demanded from them by the King.14 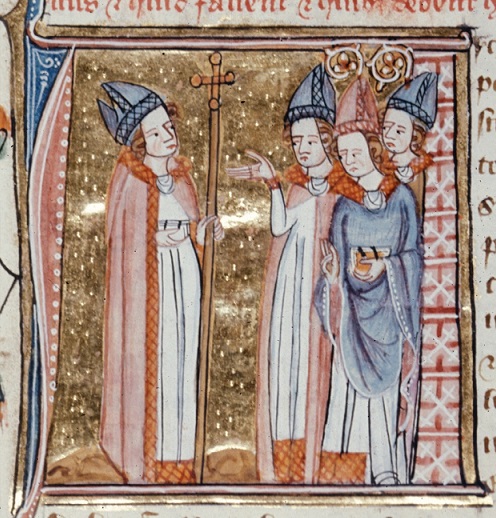 In England, on Thursday 9 April, we receive one of our earliest glimpses of Walter de Cantiloupe, future bishop of Worcester (1236-1266) and a leading figure at the court of King Henry III, presented by King John to the Shropshire church of Worfield (Wurefeld' ).15 Fifty years later, following the Battle of Lewes (1264), Walter himself was to play a distinguished but controversial role in the greatest constitutional crisis to engulf English kingship since Magna Carta and the meeting at Runnymede. In April 1215, meanwhile, in further concessions to the English Church, Giles de Braose, bishop of Hereford, was promised the restoration of pasture in Worcestershire following an inquest commanded by the King.16 Simon of Apulia, bishop of Exeter, was restored to possession of Bodmin Priory in Cornwall, pending his production of charters to this effect that he claimed to have received from the King and his ancestors.17 Jocelin of Wells, whose claims over Glastonbury were aired this week, was granted licence to establish markets and fairs at whichever of his manors he should wish, very much in line with an earlier charter granted in November 1214 to his brother, Hugh of Wells, bishop of Lincoln.18 There were also gestures of reconciliation towards leading lay magnates. Thus Robert de Ros was confirmed in possession of the manors of Castle Sowerby, Carlton and Upperby, first awarded to him in January.19 The sheriff of Surrey was instructed to ensure earl Richard de Clare possession of the manor of Betchworth, already confirmed to the earl in March.20 Notwithstanding privileges granted to the men of Lynn in Norfolk, under the protection of the bishops of Norwich, the earl of Arundel was promised that the men of Lynn would pay him all customs and service owing to him or his ancestors.21

Some of the business conducted this week was routine. Warin, described as a son (perhaps a bastard) of the count of Eu, was promised 50s. at 12d. a day, to maintain him in residence at Oxford, apparently as a royal pensioner rather than in attendance at the Oxford schools.22 Following what we can assume was a desperate plea sent from the Queen in Marlborough, the King told his chief suppliers in London to procure 100lbs of almonds, to be sent to Marlborough with all haste 'by day and by night'.23 William of Wrotham, archdeacon of Taunton and in effect keeper of the King's ships, was instructed that a mariner named Stephen Crabbe was to be released from imprisonment only if he satisfied all German or Danish merchants whose chattels he had seized. Should he fail to give satisfaction, he was to be returned to prison.24

Much the longest royal letter dispatched this week instructed the treasury in London to release a whole series of cash payments, totalling just over £500.25 Some of these covered old debts: the costs of the King's hounds, gifts to envoys of the emperor, 17s. 6d. spent on silk for the queen, and 40s. spent on jewels for Robert de Dr' (probably Robert of Dreux, whose exchange for the ransomed earl of Salisbury had been negotiated a month before). No less than 27 marks (£18) were spent on three marks weight of gold purchased at Woodstock, perhaps the same gold that was referred to in the King's instructions of 6 April, issued at Woodstock, commanding that golden tunics and banners be embellished with the royal arms. The largest individual payment was of £200, to acquit part of £330 owed for Gascon wine bought at Bristol. Nearly £50 was given to the monks of Beaulieu for the repair of their church. 10 marks (£6 13s. 4d.) were to be paid in the expenses of Master Robert of Airaines, (Hubert) archdeacon of Airaines and Pain the Lombard 'going in the King's business' (perhaps as proctors in the ongoing election dispute at Bury in which Master Robert and Pain the Lombard are both reported as acting in the King's interest).26

For the rest, at least £130 was assigned in fees to foreign, mostly Flemish or Brabantine knights and pensioners, in some cases for their Michaelmas fees owing since September 1214, more often for the Hilary term, owing since January.27 This, taken in conjunction with the King's demand for £1000 in cash to reach him by the time that he arrived in Oxford, and a further payment of 1100 marks to Aimery de Saint-Maur, Master of the Templars, to acquit loans made to Hubert de Burgh and Geoffrey de Neville 'bringing knights to us in England from Poitou', reveals something of the mounting costs of the King's military preparations.28 Certainly it supports the contention of the Crowland chronicler that it was the King's retention of foreign mercenaries that persuaded the baronial malcontents, some time before the end of April, that their projected meeting with the King at Northampton would serve little purpose and that they would do better henceforth to defend their cause in arms.29