John plans his return to England 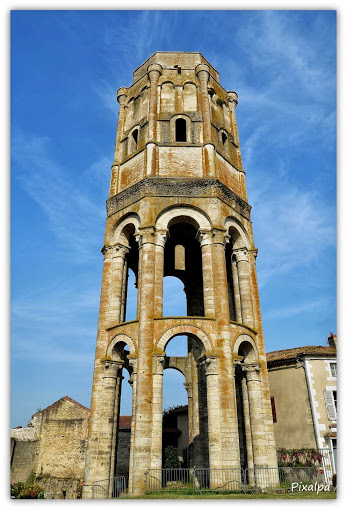 The Charlemagne Tower of the Abbey of Charroux

From Le Blanc on or after Monday 11 August, the King turned south to Montmorillon. He passed the feast of the Assumption of the Virgin Mary, 15 August, on the march, stopping first at the priory of Saint-Paixent (Sanctum Peisanc') to whose monks he granted a decorated silver chalice and where he presumably crossed the river Vienne, and subsequently at the Benedictine Abbey of Charroux (possessor of a famous relic of Christ's foreskin).1  He reached Montignac on the Charente, just to the north of Angoulême on the following day.  That Bouvines and its consequences now preyed upon the King's mind is suggested by letters issued on 14 August, commanding that two knights have access to Robert of Dreux, one of the King's most prominent state prisoners.2  Robert was son of the count of Dreux, brother of the duke of Brittany, and a close kinsman of King Philip of France.  He had been captured outside Nantes early in June.  In due course, his release was to be offered in exchange for that of King John's half-brother, William Longuespée, taken captive at Bouvines.3  The sudden upsurge of interest in Robert, in mid August, suggests that these negotiations over the prisoners taken at Bouvines may already have begun.

By the time that the King reached Montignac on 16 August, there was no doubt that the bad news from the north had been received and that a course of action had been agreed upon.  In essence, as soon as he could negotiate a truce with the French, John now intended to return to England.  Letters to the justiciar, Peter des Roches, and to more than twenty other recipients in England, including the castellans of Hastings, Porchester and Southampton offered credences to Thomas of Erdington and Henry de Vere, sent across the Channel with secret instructions over the keeping of Dover castle, the King's personal safety and the state of his affairs in England and Rome.4  The campaigning season was itself now drawing to a close.  The chances that between August and October, Philip Augustus could muster a fleet and an army with which to invade England were extremely remote.  Even so, it was by now clear that England itself might react unfavourably to recent events, both in Flanders and Poitou, and that the King's relations with many of his English barons and bishops were at so low an ebb that trouble could be anticipated.

At some point before 22 August, the King ordered an inquest into disputes over custody of the vacant bishopric of Rochester.  To Archbishop Langton, who claimed custody, the King wrote in emollient terms, promising action and meanwhile requesting the avoidance of all conflict given the weight of business that Langton must know the King was obliged to confront.  The King's letters sent on the same occasion to his own ministers in England are less guarded, noting that since the archbishop seemed to be claiming something of which no mention had previously been made to the King, little faith could be placed in his claims.5 In the meantime, the papal legate, Nicholas of Tusculum, took custody of the vacant see.6