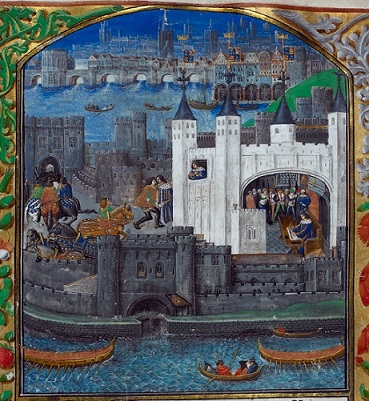 This was the last week governed by the terms of the London Treaty established at Runnymede. The understanding, since mid June, had been that the King would make good his promises to the barons, before the feast of the Assumption (Saturday 15 August), at which point the barons would surrender to him the city of London and archbishop Langton would relinquish his temporary custody of the Tower. There was by this time little expectation that such terms would be met. Instead, from Wareham on 9 August, the King wrote to Archbishop Langton, not about the Tower, but about Rochester Castle which, for the past few months, the King had been asking be restored to royal custody. On this occasion, claiming that it had been agreed that Rochester would be in royal keeping until the Easter after the archbishop's return from the Lateran Council summoned for November, the King asked that Langton release the castle to Peter des Roches, bishop of Winchester. The request was a polite one ('devoutly supplicating your fatherhood') and Bishop Peter was required to swear an oath to the archbishop to return the castle, after the term specified. It contained reference to 'common counsel', by which it was hoped that longer-term custody of the castle might be determined, after its initial surrender to Bishop Peter.1 Even so, there is little doubt that it was the issue of Rochester that was to prove the sticking point in all future dealings between the King and his archbishop, albeit that the details of this disagreement were only to become apparent in the ensuing weeks.2

As we have seen, in the previous week the King seems to have made aware of the archbishop's summons for him to attend a conference, at Oxford, from 16 August onwards.3 Yet instead of remaining within easy distance of the Thames Valley, the King veered southwards to Wareham in Dorset. Before leaving Clarendon, on 9 August, he acknowledged recent events at Norwich, whose monks had been persuaded (c.25 July) to elect as bishop the Pope's chief representative in England, and the King's friend, Master Pandulf Verracclo. Since there was concern that the Pope might refuse to endorse this promotion, Pandulf was to seek confirmation in Rome. In the meantime, custody of the vacant see was regranted to the Norwich monk, Ranulf of Wareham, acting in collaboration with another keeper to be nominated by the bishop-elect.4 Once again, these arrangements suggest a keen eye to papal sensibilities. In the north, where the Crowland chronicler alleges widespread and continuing disturbance, there were significant changes in management. William of Duston, having served for only a few weeks as sheriff of Yorkshire, was replaced by William of Harcourt, perhaps a stronger choice.5 He was also instructed to surrender Scarborough Castle to the earl of Aumale, William de Forz, a Poitevin adventurer granted his Yorkshire estates only a year or so before.6 At the same time, Philip of Oldcotes, for the past few years keeper of the vacant bishopric of Durham and one of the King's chief enforcers in the north, was instructed to hand Durham Castle and the King's estates in Northumberland to Robert de Vieuxpont.7 This was by no means to signify Philip's disgrace, but was a decision arrived at following discussions at court with the archdeacon of Northumberland, previously joint-keeper of the vacant bishopric.8 Philip's serjeants were now set to garrison the castles of Norham, Bamburgh and Newcastle.9 The monks of Durham, it was hoped, would shortly be supplied with a new bishop, either through papal approval for the translation of Peter des Roches from Winchester, or through promotion of the chancellor, Richard Marsh.10 It was nonetheless a momentous upheaval. It coincided with other changes in custody: the grant of the Derbyshire castle of the Peak to Ranulf earl of Chester, and the decision not to send Geoffrey de Neville to serve as seneschal of Poitou but to leave him in the north of England, appointing a local man, Renaud de Pons, previously seneschal of Gascony, as seneschal of both Gascony and Poitou.11 Gilbert fitz Reinfrey, sheriff of Lancashire, continued to be addressed as a faithful supporter of the King.12 In the far south, Robert de Courtenay was awarded custody of Devon and the castle at Exeter, with grants of two Devon manors to the earl of Salisbury in augmentation of his already rich pickings and apparently to support his operations as a royalist commander of troops.13 In Oxfordshire there were conflicting orders for the appointment of a new sheriff, first in favour of Andrew de Beauchamp, then in favour of Gilbert de Sanes.14 Hubert de Burgh, now granted the Essex honour of Rayleigh, agreed to surrender his short-lived custody of Herefordshire now committed to Walter of Clifford the younger.15 Roger of Clifford, Walter's kinsman, was promised an annual pension of 60 marks and was granted custody of Hereford castle together with all of the crossbows of horn and ten of those of wood with which Hubert de Burgh had previously fortified the castle.16 For the first time since the end of civil war, we read again of the supply of crossbow bolts, 4000 of which were to be sent to Hugh de Neville at Marlborough.17 Amidst various other instructions, including the restoration, in accordance with their new charter, of the mint controlled by the men of Winchester, we find a restoration of land to Anglo-Picard Thomas de Saint-Valery (close kinsman of the previously disgraced Braose clan), and a command to Peter de Maulay, constable of Corfe, to supply the queen with silks and furs for her wardrobe.18

On the diplomatic front, there were further initiatives that once again point towards an imminent reopening of hostilities. The abbot of Beaulieu, the King's veteran ambassador to the papal court, was granted wine with which to celebrate mass: a pious request that sits uncomfortably with rumours about to reach the Cistercian general chapter, that the abbot lived a life of scandal, keeping a guard dog on a silver chain at the end of his bed, and engaging in secular drinking contests.19 The Master of the Temple in Poitou was asked to extend loans of up to 1000 marks to another clerk of ill-repute, the King's chancellor, Richard Marsh, specifically so that Richard could pay knights 'coming into England'.20 On the previous day, 12 August, from Wareham, the King had written to Peter de Dreux, count of Brittany, holding out the prospect that Peter might be restored to possession of the northern honour of Richmond should he come to England 'without delay, well prepared with horses and arms'.21 As all of the chroniclers are agreed, it was the King's decision to recommence his importation of foreign mercenaries that first signalled the resumption of hostilities after Magna Carta.22 Here we have clear evidence, even before the terms of the London Treaty had expired, that the King was talking of peace but nonetheless preparing for war.