John seeks the support of the people of Northampton 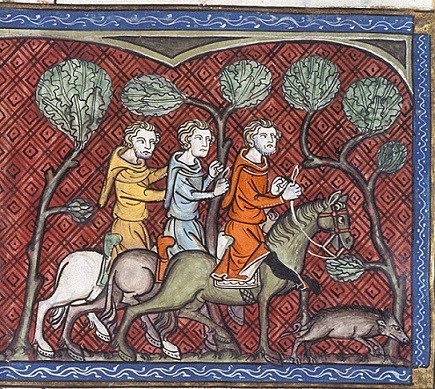 Leaving Woodstock on Monday 16 February, the King travelled via Silverstone and Blisworth to Northampton, returning southwards on Friday 20 February. This was champion sporting country, and the King's presence there, although almost certainly politically motivated, was taken as an opportunity to hunt. The present week saw the dispatch of a series of detailed instructions over the keeping of hounds and hawks, including orders for a good cart in which the King's game could be carried, and for rights of chase within the hunting preserves of the late bishop of Ely.1 Routine communications were sent to Hubert de Burgh in Poitou and to the archbishop of Dublin in Ireland, concerning land and custodies.2 Further reinforcements were sent to join the garrisons at Durham and Nottingham castle, in the latter case with specific instructions that these knights sleep within the castle at night.3 Stores of wax and wine were ordered for Berkhamsted and for Stafford, and there was a particular concern, during the King's time at Northampton, for the custody of prisoners and hostages held in the town.4 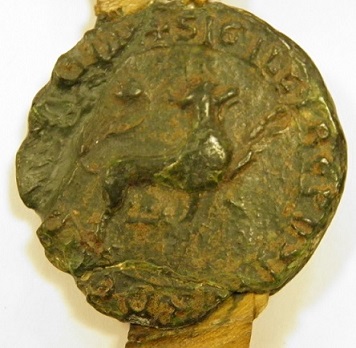 Since at least 1189, the men of Northampton had claimed the right to free election of their own reeves, a privilege duly confirmed in April 1200 by King John.5 By the time of King John's visit to Northampton in February, this had apparently been extended to the right to an elected mayor. Certainly, from Silverstone on 17 February, the King wrote to the men of the town announcing his acceptance of William Thilly as their mayor.6 Three days later, royal letters were addressed to the mayor and reeves, already supported by a council of twelve trustworthy men, whose names were to be sent to the King.7 This list of names was itself supposed to be sealed by the mayor and reeves, perhaps with a seal that survives in a unique exemplar in the Lancashire Record Office, showing what was once thought to be a 'talbot' or hunting dog, more recently identified as a distinctly Plantagenet royal lion.8

Just as the leonine seal of the reeves of Northampton was intended as a symbol of royal allegiance, so it is tempting to suggest political motives for the King's recognition of the privileges of a town standing on a crucial axis between north and south: a town that had already, as early as January, been chosen for the forthcoming negotiations between King and barons, expected to take place in late April.9 Over the next few months, the right to an elected mayor was to be recognized by John in his dealings with the men of Bayonne, crucial to the defence of the southern frontiers of Gascony. The right of mayoral election, furthermore, was to be granted to the Londoners as the very last of the King's attempts at appeasement before London itself fell into rebel hands.10 John's actions at Northampton thus suggest the first of several such attempts to buy support in a town perhaps judged all too close, and therefore susceptible, to hostile influence.

As early as 15 February, when he was at Woodstock, the King had sent instructions for the repair of Oxford castle.11 This might be considered routine were it not for the survival of the most significant of all the royal letters recorded during this week. On 19 February, from Blisworth, the King addressed letters promising safe conduct for all those 'barons of northern parts' (barones de partibus borealibus) coming to Oxford on Sunday 22 February to speak with archbishop Langton and his fellow bishops, and with William Marshal. The enrolment reports that at least three such letters were issued 'because of the diversity of the roads', presumably proclaimed to the King's subjects along all of the main routes to and from Oxford itself.12 What these letters show is that whilst the King was elsewhere, the 'northerners' gathered to treat with Langton and the bishops who, in public at least, continued to be addressed by the King as useful go-betweens in his dealings with the baronial opposition. The opposition party, far from being cowed by the King's military preparations, continued both to negotiate and to grow.

Whilst the King was in Northamptonshire, on 17 February, his envoy, Walter Mauclerk, at last reached Rome. There he set in train a series of diplomatic negotiations that in due course were to prove almost as fateful as the baronial gatherings in the north.