'He who wants peace must prepare for war' 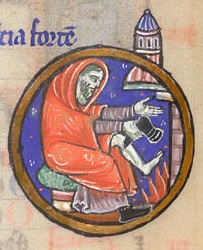 The King's movements this week were relatively restrained, perhaps as a result of winter weather. From Marlborough in the previous week, he travelled 25 miles to Cirencester, where he was undoubtedly established by Tuesday 10 February. By Friday 13 February he was at Woodstock, a further 35 miles to the north east. As in the previous week, only a single charter survives, issued at Marlborough on 9 February, in favour of a local hospital, witnessed by an inner group of courtiers, including William Brewer, Hugh de Neville, Fawkes de Breauté, and the Queen's knight, Thierry the Teuton.1 Hugh de Neville, constable of Marlborough, secured letters acquitting him from more than 1000 marks paid out from the castle's treasure earlier in January: proof, perhaps, that Marlborough itself was now being treated as a safe haven for the storage of cash essential to the King's day to day needs, and hence that the King's visit there was more about logistics and forward planning than simply for convenience or sport.2

Following on from the Irish discussions of 1 February, the principal business this week remained rapprochement with the de Lacy family, and the release or ransoming of prisoners held since the taking of the de Lacy fortress at Carrickfergus, in 1210. One such hostage, Robert de Beaumont, obtained release at the petition of John Marshal, another (John de Feypo) under letters of security to be supplied by Walter de Lacy.3 Roger de Tuit, held hostage at Lanthony Priory near Gloucester, was released under pledges from de Lacy and the prior of Lanthony, and a group of marcher lords, headed by Walter de Lacy, issued written guarantees for the future good conduct of William de Lacy, Walter's brother, now also released from captivity.4 Most of these guarantors (Walter de Lacy, John of Monmouth, Robert of Berkeley, Hugh de Mortimer and Walter of Clifford junior) appear this same week as members of a deputation sent by the King. Here, in group letters issued at Cirencester on 10 February, the earls, barons, knights and other men of a swathe of counties, extending from Staffordshire southwards to Hampshire, and from Essex to Cornwall, were commanded to listen to news to be conveyed to them by a small group of trusted courtiers, chosen apparently because of their own local influence. Walter de Lacy and John of Monmouth headed the deputation sent to the Welsh Marches, William de St John and two knights of the bishop of Winchester that sent to Hampshire, Henry fitz Count and Henry de la Pomeray that sent into Devon and Cornwall, each delegation being accompanied by a royal clerk, perhaps to serve as secretary.5

What precise messages these men carried we can only guess. It seems likely that they broadcast the need to supply defence for an essentially southern and western arc of 'royalist' counties, against threats now anticipated from the north, East Anglia and Wales. It may also be that the King continued to negotiate the swearing of local oaths, as discussed but apparently rejected in his meeting with the 'northerners' in early January. During their tour of the Welsh marches, Roger de Lacy and John of Monmouth were given licence to take at least four deer in the King's forest of Dean.6 Robert of Berkeley, sent as envoy to Gloucestershire and other southern counties, was permitted to fine 200 marks, repayable at 100 marks p.a., for release from the Jewish debts of his brother, Roger.7

Since September 1214, there had been proposals to broker the release of the King's half-brother, William earl of Salisbury, in exchange for Robert of Dreux, brother of the duke of Brittany, captured by King John at Nantes. In mid January, Robert himself had been brought from Gloucester to Winchester, where he perhaps met the King on 28 or 29 January. The count of Dreux was now asked to ensure the dispatch of William of Salisbury to Wissant, on the Channel coast. The exchange of William for Robert (himself now transferred to Dover) was intended to take place on March 4.8 Meanwhile, the Oxfordshire knight, Thomas de St-Valery, himself close kinsman to the lords of Saint-Valery-sur-Somme, was sent into France to finalise these arrangements.9 Apparently as a quid pro quo, Thomas was given new and presumably more favourable terms for the repayment of his debts at the Exchequer.10

Repairs were commanded at Wallingford castle.11 At Colchester, the garrison was strengthened, and orders were issued to ensure the proper keeping of the castles of York, Pontefract and Pickering now entrusted to Peter fitz Herbert.12 Having ordered the supply of a further 300 marks to the Poitevin baron, Savaric de Mauléon, expected to bring a mercenary army into England, by 10 February the King had received news of Savaric's landing in Ireland.13 The dorse of the membrane of the chancery Close Roll on which these entries appear, compiled after 10 February, carries a blank form of military summons, addressed to the King's subjects overseas, requiring them to attend the King before the coming feast of Easter (19 April), ready to serve with horses and arms in England at the King's expense.14 Since early January, the 'northerners' had been expecting a final settlement of grievances to be discussed at Northampton on 26 April. Heeding the warning of Vegetius ('he who wants peace must prepare for war'), the King had no intention of attending this meeting in anything other than full military readiness. Yet war rather than peace seemed increasingly to be the more likely outcome. The death of Eustace bishop of Ely (3/4 February 1215), reported at court this week, was yet another blow to the party of moderation and, as the Crowland chronicler pointed out, undermined even further the chances of a negotiated settlement.15