John prepares for trouble in the North 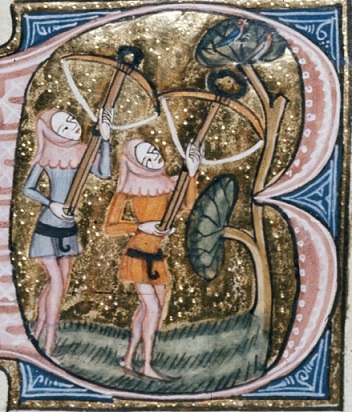 Ever since early January, the King had been anticipating two key dates in the coming months. Easter Sunday, the most solemn festival of the Church, would fall this year on Sunday 19 April. A week later, on 26 April, John was pledged to meet with the discontented barons at Northampton. The intention was that he conclude discussions over those liberties that the barons demanded but whose negotiation had been put on hold since January. According to the Crowland chronicler, at some time after John's taking of the Cross on 4 March, 'hearing that the King had summoned foreigners to his assistance', the barons met at an unspecified location, 'not waiting for the term set'. Their exchange of messages with the King on this occasion persuaded them to return to their own lands to prepare for war.1 No precise dates or locations are specified here. It is nonetheless worth noticing that as early as 30 March, the King was preparing to be at Oxford by 7 April, sending for the substantial sum of £1000 to meet him on his journey south from Nottingham.2 At Oxford there were also to be important negotiations with the Church concerning a variety of business including ongoing disputes over the union of Glastonbury to the see of Bath and Wells, and over the King's stubborn refusal to accept the election of Hugh of Northwold as abbot of Bury St Edmunds.3 It is possible that the exchange of messages alleged by the Crowland chronicler can be dated to the time of this Oxford meeting, from 7-13 April. Meanwhile, from the present week, two charters survive, neither of them recorded in the chancery Charter Roll. The first is a general confirmation to the canons of Barlings Abbey, the second a grant of land at Whaley and Bolsover in Derbyshire made during the King's itinerary south via Melbourne. Their witness lists include three royalist 'aliens' (the Breton Philip d'Aubigny, the Norman Fawkes de Breauté, and the Touraingeau Philip Marc) and at least one future rebel, William d'Aubigny of Belvoir.4 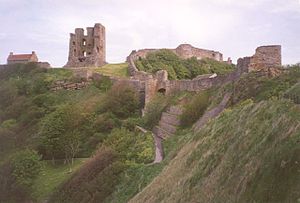 We can assume that the King's visit to Nottingham had convinced him that things were far from happy in the north. On 29 March, Hugh de Bernevalle and Godescal (of Malines) were commanded to hand over their custody of Scarborough castle to Geoffrey de Neville, leaving at least 60 serjeants and 10 crossbowmen to garrison the castle.5 Hugh, Godescal (one of the King's Flemish mercenaries) and Geoffrey were all to be found at court by the time that the King arrived at Melbourne three days later.6  Proof of royal micromanagement is supplied by an order to Hugh and Godescal that, having released to Geoffrey the £100 that they had been given to munition Scarborough, together with six crossbows of horn and their crossbow bolts, they were to send back to the King the boxes in which the crossbow bolts had been transported.7 Orders were sent to Peter de Maulay's bailiffs at Doncaster to close the vill with hurdles and stakes along the town ditch, constructing a ?barbican (bretasca) on the bridge.8 £700 was deposited with Philip Marc at Nottingham, with orders on 31 March to pay £200 of this to Fawkes, presumably for further military operations in the north.9 On the same day, Philip of Oldcotes at Durham was notified of the dispatch of eighteen newly retained knights and crossbowmen who he was to take into the King's service, paying them their wages on a carefully controlled scale ranging from two shillings a day for a knight down to a mere threepence a day for unmounted crossbowmen.10 Gilbert de Laval (alias Delaval), lord of Callerton in Northumberland and a future rebel, whose hostages had been returned to him, was instructed to deliver them once again to Philip of Oldcotes.11 Philip was also ordered to supply a prest of 60 marks to another Northumbrian landowner, Richard de Umframville, whose sons had previously been raised at court, and a corselet of chain mail and an iron helmet to Henry de Mandeville, described as the King's kinsman (precise kinship unknown).12 Gilbert fitz Reinfrey, in Lancashire, and Brian de Lisle, in the north Midlands, were instructed to munition the King's castles with knights and other soldiers 'against our enemies'.13 Brian took charge of the King's houses at Clipstone, whilst his duties at this time included implementation of the King's orders for the restoration of a functioning chapel in the royal hunting lodge at Kingshaugh.14

Nor was it only in the north that trouble was anticipated. Instructions over the keeping of Northampton castle were dispatched via Richard Marsh, the King's chancellor, and the garrison of Rockingham was strengthened.15 Revealing continued anxiety over the loyalties of East Anglia, Colchester was ordered enclosed with wooden defences by view of its constable, Stephen Harengod.16 Various instructions were sent to the archbishop of Dublin, acting as justiciar in Ireland, including an order that he ensure that the men of Walter of Lacy continue to pay off whatever fines they had offered, regardless of the settlement that Walter himself had subsequently achieved with the crown.17 There were also interventions on behalf of Alan of Galloway, a crucial player in relations between England and Scotland, whose seizure of a ship at Kirkcudbright in Galloway sparked a dispute over ownership once the ship reached Ireland, loaded with Alan's merchandise.18

In other affairs of no immediate military significance, the Hertfordshire manors of Essendon and Bayford, long the possession of the King's treasurer, passed to the courtier knight, John of Bassingbourne.19 Their former holder, the King's treasurer, was himself about to defect to the rebel cause.20 A longstanding disputes over Lincolnshire fenland, fought out between the abbeys of Crowland and Spalding and the men of Pinchbeck, supposedly laid to rest by charters of Henry II, Richard and John, was once again declared settled.21 Hospitality from the English religious was requested for a Poitevin, the abbot of Notre-Dame des Alleuds, south of Niort, perhaps visiting England on the business of the Cistercian order.22 In Yorkshire, there was a grant of a minor warship to Ranulf earl of Chester.23 The monks of Newstead Priory in Nottinghamshire were promised five oaks from the King's forest, and royal protection was extended to the lepers of St Leonard's at Bedford.24 Thus was routine maintained amidst the gathering storm.