The matter of episcopal elections

For the whole of this week, only two royal letters are recorded, one on the Patent Roll, the other on the Close Roll.  At Rochester, on Monday 10 November, the King instructed Engelard de Cigogné to ensure the provision of wine at Tewkesbury abbey, preliminary to a projected royal visit.1  What is chiefly of interest here is that the King had passed from Essex into Kent, presumably by ferry across the Thames estuary.  The see of Rochester had lain vacant since the death of bishop Gilbert de Glanvill in June 1214, with the King vexed during his time in Poitou by the efforts of Stephen Langton to assert his right to patronage and custody of Rochester as a dependency of Canterbury.2  A papal mandate commanding election at Rochester, issued on 13 September, had presumably reached England by early November.3  Having been defied by the monks of Bury on 4 November, the King perhaps fared no better a week later at Rochester.  Certainly, by the following week he had agreed to recognize Langton's privileges as patron.  In due course, he was obliged to accept the monks' election as bishop of Rochester of one of Langton's former Parisian pupils, Master Benedict of Sawston. 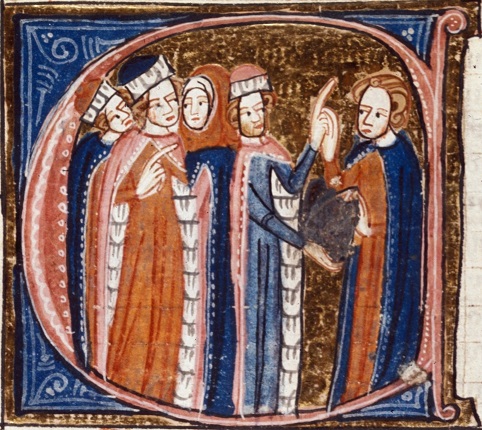 The delicate matter of episcopal vacancies also lay behind the second royal letter recorded this week.  At Sutton at Hone near Dartford, on Saturday 15 November, the King commanded that the vacant see of Norwich be entrusted to Master Ranulf of Warham, a monk of Norwich Cathedral Priory.  The sheriff of Norfolk was forbidden to intervene in the cathedral's affairs, and the prior and monks of Norwich were specifically reminded that Master Ranulf had previously enjoyed custody of the see under the late bishop, John de Gray.4  John de Gray had died on 18 October 1214.5  Since February 1214 he had anticipated papal approval for his translation from Norwich to the far richer see of Durham.  In the meantime, both Norwich and Durham had come under an intense degree of scrutiny by the Pope and his agents in England.6  In the longer term, as a diplomat and royal justiciar in Ireland, John had been to a large extent an absentee from Norwich.  As a result, Master Ranulf of Warham, bishop's official since at least 1202, had spent a decade or more as de facto custodian of the see.  Why though was Master Ranulf confirmed in this custody, in November 1214, and why did the King refuse to take Norwich and its revenues under direct royal control?  The answer lies with the delicate matter of 'regalian right': the King's claim to custody of vacant bishoprics and their revenues.

When, after 1213 and the reconciliation between Church and King, the exiled bishops had returned to England, the King had been forced to offer to repay the money which he had previously extracted from the exiles' estates.  In support of this settlement, he had taken a solemn oath, backed up by an undertaking that unless his promises were kept he would permanently forfeit any right to the custody of vacant churches.7  To assess the extent of restitution that should be made, enquiries were put in train, supervised within the diocese of Norwich by the bishop's official, Master Ranulf of Warham.8  As a result of such enquiries held across the country, in January 1214, the pope had demanded that the King pay the quite enormous sum of 100,000 marks in compensation.  In practice, John had been able or willing to raise less than half of this sum, whilst the collapse of his continental expedition made it unlikely that any more money would be forthcoming in the immediate future.9  As a result, the King should in theory have forfeited all regalian right, as agreed in the settlement of May 1213.  Instead, and to avert this penalty, he made a series of piecemeal concessions to individual bishops, culminating on 21 November 1214, as we shall see next week, with a charter promising all cathedral and monastic churches the right to hold free elections in perpetuity.10  This, the so-called 'charter of free elections', specifically reserved the King's claim to the custody of vacant churches and monasteries, so that in practice the sanctions laid down in 1213 in respect to regalian right were never enforced.  Nonetheless, given that John had become aware of the vacancy at Norwich only a week before issuing his charter of free election, and given that he was threatened with the loss of his right to the custody of vacant bishoprics, it is easy to appreciate why he should have exercised such restraint in granting custody of Norwich to one of the cathedral's own monks.

Between October 1214 and March 1215, the King made no further attempt to interfere in the administration of the Norwich estates.  It is not even clear that Master Ranulf of Warham was expected to answer for the vacancy receipts to the crown.  Certainly no money appears to have reached the King, no tallage was imposed, nor is there any suggestion that the King was billeting his own pensioners upon the monks, or appointing his own candidates to vacant parish churches under the patronage of Norwich, standard practices in all other vacancies of the reign.  The only demands to be made of Master Ranulf were that he repay 200 marks of a 300 mark loan which had been made to the late bishop de Gray, and that he set about collecting the scutage charged for the Poitevin expedition of 1214.11