John and the siege of Rochester: week one 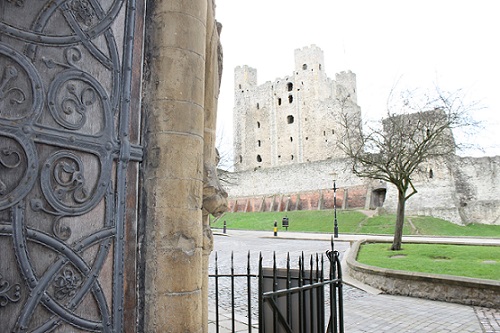 Rochester Castle, as viewed from the Cathedral west door

From Canterbury, the King made his way westwards along Watling Street, apparently arriving in Rochester on Tuesday 13 October, the feast day of St Edward the Confessor. The siege of Rochester castle had begun some days, perhaps as much as a fortnight before this. Ralph of Coggeshall, who is far the best informed of all the chroniclers here, dates the opening of the siege proper to Sunday 11 December.1 This, however, he suggests represented a second stage to hostilities that the King had opened at Rochester some time before. Hoping to burn Rochester Bridge and thus to deny the rebels in London access to the castle, at about the time of the drowning of Hugh de Boves (i.e. c.28 September), John and his forces had moved westwards to the Medway. There they had been fought off by Robert fitz Walter and 60 rebel knights. In this fighting, Coggeshall records, the King took prisoners including Oliver d'Argentan and David Giffard. To curb the King's fury, Oliver's elder brother, fearing that the King would otherwise have Oliver killed, and being unable to negotiate a ransom, obtained permission from his fellow rebels to return to the King's allegiance.2 Independent evidence of this can be found in the present week when, on Saturday 17 October, the King issued letters of protection for Richard d'Argentan and all he might bring with him to treat of peace, this safe conduct to last until the coming Monday, 19 October.3 The dating here, however, does little to clarify whether the skirmish with Fitz Walter, Argentan and Giffard occurred at about the time of the King's arrival in Rochester, c.13 October, or, as Coggeshall implies, on an earlier occasion, perhaps during the King's probing towards Newington and Malling after 27 September.

The King was destined to remain in camp at Rochester, his troops and horses accommodated in the monastic complex of Rochester Cathedral, for a full eight weeks: the longest period in his reign, and perhaps since his childhood, that he had remained in any one place. According to Coggeshall, the drinking and whoring amongst the royalist forces were the subject of grave scandal, carried out only a few paces from the cathedral's high altar and the shrines of St Paulinus and St Ithamar. It is also Coggeshall who names the chief rebel commanders at Rochester as William d'Aubigny of Belvoir, Reginald of Cornhill and William of Eynesford, placed in charge of more than 100 knights, serjeants and crossbowmen.4 The 'Anonymous of Béthune' adds to this list the names of Thomas of Moulton, William d'Avranches. 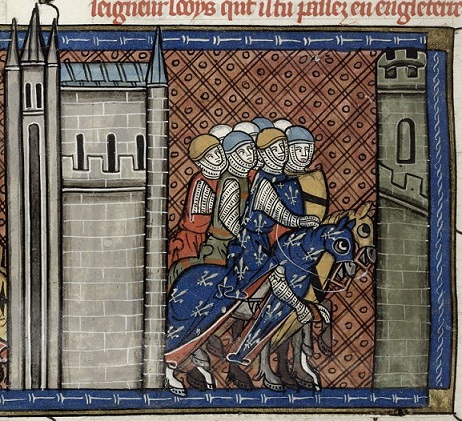 At Ospringe, on 11 October, the King arranged for costly robes and silver cups to be presented to a nephew of the King of Norway, perhaps as part of diplomatic negotiations that would have included the disposition of Norwegian forces in Scotland, from where King Alexander II was about to move south to attack the castles of Northumbria.5 Apart from his own efforts at Rochester, marked on Wednesday 14 October by a command to the reeves of Canterbury to set every forge there to work producing pick axes, the King also sent an expedition by sea into East Anglia, from Dover to Dunwich.6 The intention here was perhaps to oppose a force sent by Louis of France, estimated by Ralph of Coggeshall as 7000 armed men. According to Coggeshall, these men landed at the Orwell estuary and nearby ports, the barons having already elected ('elegerant') Louis as King ('in regem sibi elegerant'). Saher de Quincy, Coggeshall informs us, served as the chief go-between in baronial negotiations with France. In dealings with both France and Scotland, Coggeshall alleges that King John resorted to forgery, sending letters in the names of the barons alleging that peace had been made and that not only should Louis remain in France but that the northerners should delay their coming to London. Saher de Quincy denounced the letters sent into France before Philip Augustus who in due course accepted Geoffrey de Mandeville and Henry de Bohun as hostages guaranteeing the barons' good intentions.7 Meanwhile, the timing of these rebel attacks, from Scotland, from France, and in due course from Wales, suggests a degree of complicity and co-ordination between the King's enemies.  This in turn suggests a relatively sophisticated diplomatic initiative on behalf of the rebel barons in London.  At about this time, both Oxford and Northampton were placed under siege by the barons, apparently with the assistance of engineers recruited from France.8 The King himself continued to draw in mercenaries from Flanders and perhaps from Ireland.9

For the rest, and in a pattern repeated hereafter, the vast majority of entries on the chancery rolls concern confiscations or reallocations of land. Some of these are easily interpreted. Thus there were seizures from several of the greater barons, including Geoffrey de Say (granted to Peter de Craon), Richard de Clare earl of Hertford, Geoffrey de Mandeville earl of Essex (granted to Roger de la Zouche), Robert de Valognes, Ralph de Chenduit, and William de Lanvallay, the beneficiaries of these assignments being in many cases Frenchmen, Bretons or Flemings.10 Given the local origins of many members of the rebel garrison of Rochester, there were also widespread seizures of land in Kent.11 In other instances, letters of safe conduct or protection were issued not only to rebels (Richard d'Argentan, and unnamed knights of the rape of Hastings), but to loyalists (the earl of Devon, the count of Eu, and a knight of Roger de la Zouche) and to those such as Henry de Balliol whose allegiance remains unspecified but can be presumed to have been royalist.12