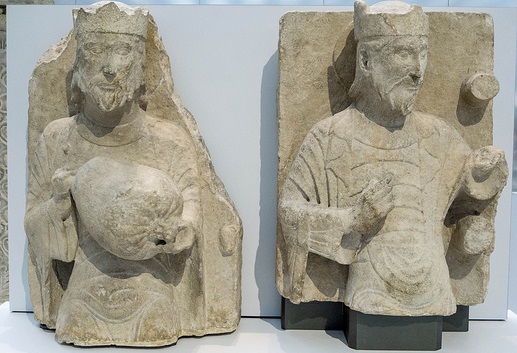 Images of the King of France, from Notre-Dame-de-la-Couldre, Parthenay (12th Century)

Following Bouvines, King Philip had returned to the Ile-de-France, and by August 1214 was established at Melun.1  The Poitevins expected him to come south in the first week of September.2  At Parthenay, on 31 August, John acknowledged overtures made by the papal legate, Robert Courson, and granted a 15 day truce to last from 31 August, with safe conduct meanwhile for the legate to go to the King of France.3  In effect, this was to mark closure to the period of open warfare that had existed for the past six months.  That there were still hopes at this stage that a favourable peace could be obtained for John and his supporters is suggested by letters to the legate holding out the possibility that the count of Nevers, himself in dispute with King Philip over quite other causes, might be brought under John's protection.4

In the south, John's principal concerns remained the maintenance of his alliances with the Poitevins and his hold over the city and county of Angoulême.  Following minor favours for the Lusignans, on 6 September the King did his best to ensure that Ralph de Lusignan was paid full compensation for the lands in Normandy that he had forfeited through his adherence to the English.  At the time of their initial agreement, in May 1214, Ralph had been promised an annual rent equivalent in value to the county of Eu.  John now ordered a full search of the evidences, and clear proof that the 6000 livres a year that Ralph had been promised had been paid for the next five years, via a sum of 30,000 livres poitevin deposited with the Templars of La Rochelle, the King's principal bankers at this time. On the same day, a final settlement with the dowager countess of Angoulême was agreed, by which the countess was to have 500 livres potevin a year, with a lump sum of 2500 paid cash down to the Templars, repayable in part or in whole should the countess die before the five years were expired.  All told, these settlements alone cost the extraordinary sum of 32,500 livres paid cash down in coin received from England.5  The Master of the Temple was given safe conducts for a visit to England, presumably for financial purposes.6

There were many other calls upon the King's money.  On 1 September, the justiciar in England was asked to send 2000 marks to the Emperor Otho in Germany.7  In Aquitaine, new constables were assigned to the castles of Ribérac and Merpins, there were renewed attempts to ensure peace in the Limousin town of Saint-Junien, and verbal instructions were dispatched concerning custody of the King's niece, Eleanor of Britanny, previously held at Merpins.8  On 6 September, from Saint-Maixent, the King wrote to papal legate in England and to the leading members of his counsel, asking them to consider proposals that Robert of Dreux, John's most significant French prisoner, be exchanged for the release of William earl of Salisbury captured at Bouvines.  These letters warned of rumours that, should Robert be released, the French king would have no hesitation in ordering the death of Reginald count of Boulogne and the life-imprisonment of the count of Flanders, both of whom had been taken with earl William at Bouvines.  So delicate was the diplomacy here, that the King sent his own bastard son, Oliver, to England to oversee discussions.9  A day earlier, the justiciar, Peter des Roches, was instructed to promote as abbot of St Albans a brother of Walter Mauclerk, himself a royal clerk deeply involved in the peace talks between England and France.10

Further letters were intended to secure the election as abbess of Barking of the aunt of Robert de Ros (himself one of Magna Carta's future baronial twenty-five), and to prevent the election of Richard Poer, dean of Salisbury, as bishop of Durham.11  Arrangements were made for the return to England of various of the attendants of the Queen, Isabella of Angoulême, and for two knights of Aubrey de Vere, earl of Oxford, who had recently died in Poitou.12  As an indication that the King himself was now preparing to abandon France, on 5 September, arrangements were made for the royal hunt to be evacuated from La Rochelle to England.13