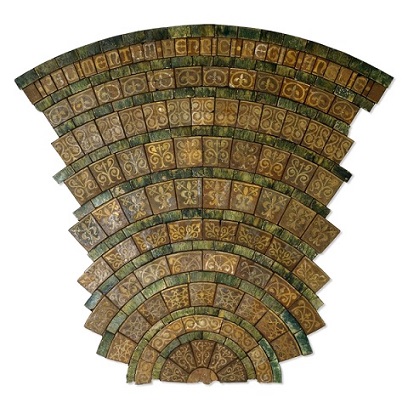 Pavement from Clarendon Palace, commissioned by Henry III, now at the British Museum

After the significant council of the previous week, the King now made his way westwards, via Brill, Woodstock and the bishop of Winchester's manor at Witney, to his favoured haunts in Wiltshire: Ludgeshall, Marlborough and Clarendon.  Little business is recorded in this week, and not a single charter.  At Brill, on 24 November, there was a renewed plea for restraint from the clergy in demanding compensation for damages done since 1208.1  There were the orders for an unidentified niece of the King to be sent to Corfe and from there to Poitou and on to Germany to join the emperor.2  These arrangements remain unexplained.  Instructions were sent to Reginald of Cornhill at Rochester, at this stage still fully responsive to royal command.3  On 28 November, at Westminster, the Exchequer issued a massive writ of liberate, covering more than sixty individual payments, many of them concerned with pensions for cardinals, the Pope, or those involved in diplomacy with the Emperor.4  If various of these pensions had been held back to 28 November, from the time that they had theoretically fallen due at Michaelmas, then there is perhaps evidence here for strain at the Exchequer.  At the same time, the fact that the money could now be handed over suggests that the King was very far from starved of cash.