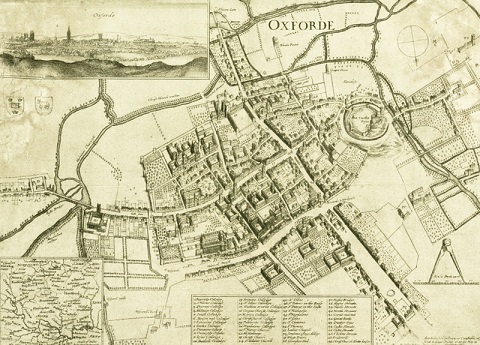 Oxford, in a seventeenth-century engraving

Until the King reached Oxford on the Saturday at the end of this week, the chancery rolls record only a dozen or so letters, perhaps as a function of the King's punishing itinerary from Corfe via Clarendon and then on to the Thames Valley. Since the business transacted at Oxford from 18 to 23 July is best dealt with as a whole, we shall reserve it for consideration next week. It is nonetheless likely that a meeting at Oxford in mid July had been agreed ever since the field of Runnymede. As early as 29 June, we find the King laying down a stock of wine to await his arrival in Oxford.1 If we can trust the letters of Robert fitz Walter and the barons preserved by Roger of Wendover, then a tournament held by the barons at Stamford had extended from 6 to 13 July. This would have allowed them to ride over to Oxford thereafter at a leisurely pace. It was also anticipated that Welsh and Scots representatives would attend, and to this end, as early as 7 July, from Kelso ('Calth'), King Alexander had written to King John, excusing his own attendance but supplying letters of credence for his envoys: the bishop of St Andrews, Philip de Mowbray, Robert de St German, Walter de Lindsay, Ingram de Balliol and John of Maxwell.2

In the event, it was King John himself who arrived late. He did not leave Clarendon until the morning of Wednesday 15 July, and only then not until he had transacted a considerable volume of routine business. Before this, he had lingered in Corfe until Tuesday 14 July, despite the fact that he seems to have been expected to reach Oxford the following day. Writing later on the Wednesday from an unspecified location 'between Newbury and Abingdon', he announced that he would be unable to reach Oxford as planned, but would instead send to Oxford the archbishop of Dublin, the bishop of Winchester, Master Pandulf, William Marshal, the earls of Warenne and Arundel, and Hubert de Burgh the justiciar to serve as his proxies.3 This letter is peculiar in at least two respects. Its failure to specify a place of issue seems deliberately intended to suggest haste and confusion, even though this part of Berkshire was hardly under-populated or without place names at which letters could have been dated. Moreover, by this time the King was within twenty-five miles of Oxford and might easily have completed his journey. Instead, he turned southwards to his hunting lodge at Freemantle in Kingsclere (Hampshire), in entirely the opposite direction from Oxford. He did not reach Oxford until Saturday, three days later. The implication must be that his delay was calculated rather than forced and that he deliberately wished not to attend the opening days of the meeting, no doubt in order to see what might unfold in his absence.

Instead, at Freemantle on Thursday 16 July, he authorized a charter to his tailor, William Scissor, granting a house at Winchester, witnessed by an inner circle of royalists including William Brewer, Hugh de Neville and the alien constables Fawkes de Breauté and Geoffrey de Martigny.4 Only one other charter is recorded this week, issued on 13 July and witnessed by other aliens including the bishop of Winchester and Peter de Maulay. This conferred favours in Ireland upon another staunch royalist, the archbishop and his cathedral of Christ Church Dublin, including the vill of ‘Tibrary’ (perhaps Tipperstown, co. Dublin).5 Treasure deposited with the religious continued to trickle in to court.6 The men of Bere Regis in Dorset were granted a weekly market, and there were orders to Hubert de Burgh involving redistribution of property in the Canterbury Jewry.7 The brothers of the order of St Anthony de Vienne were licensed to preach throughout Poitou and Gascony, seeking alms for their hospital at Saumur on the Loire: an interesting indication this, that the King intended that such traditional Plantagenet lordships as Saumur, only briefly recovered in 1214, might still be regarded as his responsibility to protect.8

Before leaving Clarendon, on the morning of 15 July, the King authorized a series of letters excusing the bishop of Exeter and others attending the Lateran Council from answering pleas in their absence.9 Also at Clarendon, on 15 July, there were routine commands to the seneschal of Gascony, another to the mayor and prévôts of La Rochelle referring to the continued disloyalty of Aimery de Craon, and routine instructions to the Exchequer, in one instance authorizing the cost of serjeants posted at Dorchester in Dorset, in another auditing expenses made as long ago as October 1214.10 At Corfe, as early as 12 July, we have our first certain proof that the Exchequer officials were once again busy with their rolls and records, with a command that the pledges for 200 marks of a 500 fine offered by the official, Charles of the Wardrobe, be removed from the roll ('de rotulo vestro extrahi faciatis').11