The Treaty Between King John and Philip Augustus, 18 September 1214 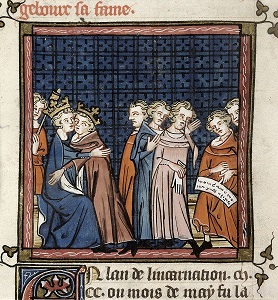 At Chinon, on Thursday 18 September, King Philip put his seal to a five-year truce set to last from 18 September 1214 until Easter 1220.  On the same day, King John issued a charter at Parthenay confirming the truce from 18 September in more or less identical terms to those contained in Philip's letters.  These two counterpart documents have long been in print, thanks to copies of Philip's charter surviving in the Capetian chancery registers, and thanks to the survival of the sealed original of John's charter in the French royal archives.1  The truce itself, however, has attracted only brief notice from historians.  It included a dozen or more individual provisions which are worth setting out in detail.

To begin with there was to be a mutual award of truce, to last from 18 September 1214 until Easter 1220 for all who had made open war.  Prisoners held on either side were to remain to their captors and oaths that the vills of Flanders and Hainault and their knights and men had made to Philip were to remain in force.  No murderer or anyone exiled from either side during the time of war (and here the English original of the treaty is far clearer than the mangled copy in the French chancery registers) was to return to his lands on either side of the divide without permission.  Anyone entering Capetian or Plantagenet lands to negotiate over his estates might pass through but not remain unless he had a reasonable 'essoin', for lack of which he must go immediately to a sea port from which he could expect to return into exile.  Angevins or Bretons who had fought alongside John might return to their lands provided that they supply securities to the King of France's seneschals that they would do King Philip no harm.  Poitevins returning to Poitou would swear similar oaths to respect the interests of King John.  As supervisors and revisers (dictatores et emendatores) of the truce, John nominated Hubert de Burgh seneschal of Poutou, Renaud de Pons, the abbot of St-Jean-d'Angély, and the dean of Saintes, with King Philip nominating four men of his own, including the abbot of Marmoutier and the archdeacon of Tours.  These eight were empowered to elect their own replacements should any of them die or fall ill.  Amendments to the truce could be made by simple majority of five of the eight, with any matters they were unable to resolve being referred to the kings of England or France for solution within sixty days notification from the dictatores.

For breaches of the truce in Poitou, Anjou, Brittany and the Touraine, the dictatores would meet at the nunnery of Fougereuse near Passavant-sur-Layon (a Benedictine dependency of Saint-Sulpice Rennes, Deux-Sèvres, com. St-Maurice-la-Fougereuse).  For breaches of the truce in Berry, the Auvergne, the county of La Marche or the Limousin, the dictatores would meet between Éguzon (Agurandas) (Indre, com. Éguzon-Chantôme), on the river Creuse, and the castle at Crozant (Crusanum) (Creuse) belonging to the count of La Marche.  If either side wished to cease the special financial burdens (mala tolta) which they had imposed, they might agree to do so, matching steps taken by their opponents.   Frederick II (described in the French document as King of the Romans and Sicily, but in the English portion of the truce merely as King of Sicily) could be brought within the truce on the side of King Philip if he wished, just as Otho (described in the French version as 'King', but by the English as 'Emperor of the Romans') might be included on the English side.  King Philip might aid Frederick in the empire and King John assist Otho, short of misdeeds (absque meffacere) or a reopening of war.

As guarantors, Philip appended the names of thirteen witnesses including the counts of Saint-Pol and Alençon.  John's version was witnessed by an even larger body of 38 witnesses headed by Hugh de Lusignan count of La Marche, Ralph de Lusignan count of Eu, the earls of Chester, Ferrers and Warwick, the abbots of Westminster and Saint-Maixent and then proceeding via a series of important Poitevin nobles (Savaric de Mauléon, Renaud de Pons the elder, Hugh l'Archevêque, Hugh de Thouars, Hugh de Lusignan the younger, Porteclie de Mauzé, Geoffrey de Tonnay, Renaud de Pons the younger, Robert Marcellus son of Geoffrey, William son of Hugh l'Archevêque) and then a list of 21 English barons headed by John de Lacy constable of Chester.  It is worth noting that these English witnesses included Walter de Lacy and Fulk fitz Warin, former rebels against King John, and William Malet, Richard de Montfiquet, William of Huntingfield and William de Lanvalay, all four of whom, in June 1215, were to be amongst the rebel twenty-barons of Magna Carta.  That these witnesses were intended to play a practical role in the implementation of the treaty is suggested, nearly two years later, when in accordance with the terms of September 1214, talks over the truce were convened at Feugereuse, attended on the English side by Hugh count of La Marche, Ralph count of Eu, Hugh de Lusignan the younger, Geoffrey de Tonnay and Richard Marsh, four of these five having been amongst the witnesses to John's charter of 18 September.2

The treaty with France was itself deposited in John's archive six weeks later, on 30 October, after his return to England.3 With it were deposited documents sealed variously by some of the greater barons of Normandy: John and William de Préaux, Fulk Painel, Richard de Harcourt, Robert de Thibouville and William du Hommet.  As listed on the dorse of the Patent Roll, these could easily be assumed to be copies of the Anglo-French truce of September 1214 for some reason issued under the seals of leading Norman barons.4  More likely, they represent engagements (treuga) into which John had entered, before the defeats at La Roche-aux-Moins and Bouvines, by which some of the greater magnates of Normandy had been persuaded to seek terms with the English King.  It was probably his treuga with Fulk Painel that had led John, on 25 June, to issue his charter in favour of Fulk, in due course entered on the dorse of the chancery Charter Roll.5  It is one of several regrets concerning the diplomatic archives of this year that the other Norman treuga are now entirely lost.  Their delivery to the justiciar in late October was a final reminder of the great things that King John had once hoped might emerge from his expedition, now buried in the far from dramatic Anglo-French truce of 18 September.

Peace with Philip Augustus (The Itinerary of King John)