Who Did (and Did Not) Write Magna Carta

June 2015, by Professor Nicholas Vincent and Professor David Carpenter (under the expert guidance of Teresa Webber) 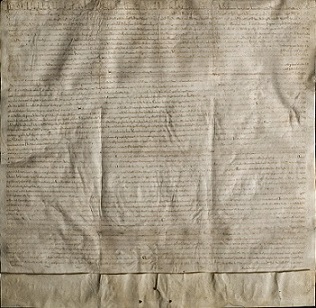 Today's media report some of the findings of that part of our Arts and Humanities Research Council project based upon a three-year search for original charters written in the name of King John or associated with the King's chancery.1 Nearly two hundred and fifty such documents survive in archives across England, Scotland, Ireland, Wales and France, and as far afield as Oslo, California and other more or less exotic locations. Our conclusion, based upon an assessment of this evidence in close collaboration with Teresa Webber of Trinity College Cambridge, is that the charters of King John can be divided into a series of families depending upon the identity of the particular scribes who physically wrote them. Several such groupings have been detected. For the latest findings here, Webber will have much more to say on Thursday when she addresses our international conference in London.

In the meantime, not all of the King's charters were written by scribes attached to the royal court. It is our contention that whilst the two British Library originals of the 1215 Magna Carta were produced in the royal chancery, those in the cathedral archives at Lincoln and at Salisbury were produced by scribes attached to those cathedral churches. As we have explained, this has significant implications for our understanding of the charter. The King, having agreed to Magna Carta, probably had little intention that it be either publicized or observed. Many other such treaties or promises, made by earlier kings, had faded on the midnight air with no lasting memorial or effect. In 1215, it was the English bishops who thwarted the King's intention that the charter vanish with little or no trace. It was the bishops who not only published and preserved but, as we now believe we can show, physically produced various of the originals of Magna Carta. 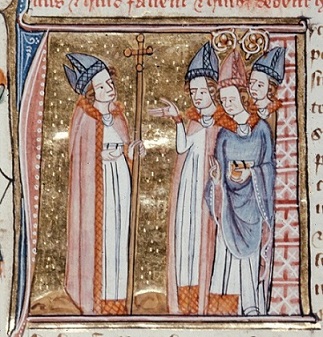 By these means, the settlement was permanently memorialized. From this, another conclusion flows. Any contemporary of King John looking at the Lincoln or Salisbury Magna Carta would have seen something that 'looked' like an episcopal rather than a standard royal chancery production. To cite an analogy, imagine turning on the radio today and hearing the news broadcast by a bishop, preceded by plain chant and followed by a prayer. This gives some idea of what it was like in 1215 to view the King's most significant enactment not only produced in a series of episcopal chanceries but preserved in the great cathedral churches of England.

So far so good. These are important points, and by them we are prepared to stand. Now, however, we approach a substantial hedge dividing journalistic enthusiasm from scholarly enquiry. From Acusilaus of Argos to Lord Dacre of Glanton, the past is littered with historians who have exaggerated, invented or misinterpreted their evidence, pursuing the good story at the expense of the true. Before we condemn ourselves to this category, it is important that we state here precisely what it is that we are, and especially what we are NOT, claiming to have discovered. 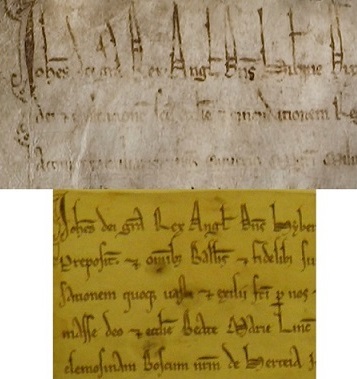 The Lincoln Magna Carta (top) and a charter of King John for the bishop of Lincoln from July 1215.

We are agreed that there are very strong reasons to suppose that the Lincoln Magna Carta was produced by the same scribe who wrote at least two other royal charters for Lincoln, one in January, the other in July 1215. The hand of this scribe does not, so far as we can establish, occur in any other charters of King John for beneficiaries away from Lincoln. Teresa Webber, who first raised this possibility and upon whose advice and caution we have been heavily dependent, is happy for the Lincoln Magna Carta to be accounted the work of a Lincoln rather than a royal chancery scribe. Following in the footsteps of Professor David Smith in tracing the original charters of Hugh of Wells, bishop of Lincoln, we can perhaps go further, and suggest that this same, or a similar hand, occurs in up to half a dozen of the charters issued in the name of Hugh of Wells at around this same time. This remains a supposition rather than a certainty. Our identification of the Magna Carta hand with the scribe of royal charters to Lincoln issued in January and July 1215 is fairly confident. Our identification of the Magna Carta hand with that of the bishop's charters is less so. 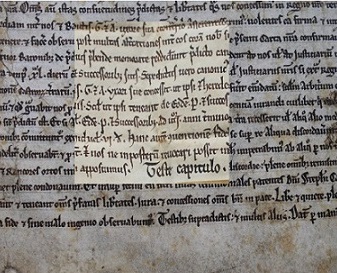 A charter for Dean Adam of Sarum, superimposed upon the Salisbury Magna Carta.

In the case of the Salisbury Magna Carta, there has long been a suspicion that this was a local rather than a chancery production. Our discovery of a charter of Dean Adam of Sarum settling a dispute over land at Warminster, written in a hand that is similar to that of the Magna Carta, may help to confirm this suspicion. We are not stating as a certainty that Dean Adam's charter is written in the same hand as the Salisbury Magna Carta. Indeed, whilst some experts to whom we have shown the evidence are inclined to support an identification, others, including Webber, remain sceptical. We are stating merely that there are several points of similarity here, and that these go beyond the merely facile. In this respect our findings complement those published online by Elaine Treharne and Andrew Prescott. Without reference to our charter of Dean Adam, Treharne and Prescott note certain similarities between the hand of the Salisbury Magna Carta and the hand at work in various parts of the Salisbury Cathedral cartulary known as the Register of St Osmund. All five of us (Webber, Treharne, Prescott, Carpenter and Vincent) are inclined to look here for a local Salisbury centre of production, at a time when Salisbury itself was in turmoil as a result of the transfer, planned for 1220, of the old Cathedral establishment from its Babylonian captivity on the hill of Old Sarum, into the new Jerusalem of the city of Salisbury, at this time slowly rising on the banks of the river Avon. 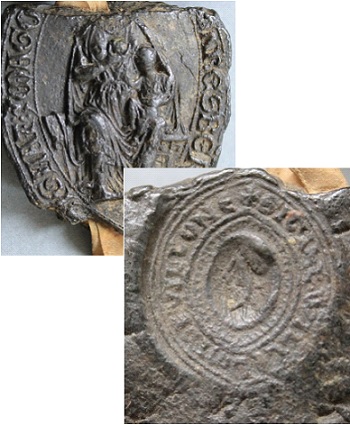 Beyond the pursuit of particular styles of writing, what has perhaps made most stir in today's newspapers is that the newly discovered charter in the name of the Dean of Sarum is not only written in a hand similar or identical to that of the Salisbury Magna Carta but retains its seal. On one side this displays an image of the Virgin and Child, clearly an official seal of the Dean and Chapter (although not, so far as we can establish, previously recorded). On the other side it carries a counterseal showing what appears to be a classical image of a standing figure (too badly rubbed for identification, although Ceres, or a sower of seed, might be possibilities). The legend here identifies this as the seal of William of Wilton, himself previously known merely as a canon of Sarum/Salisbury, whose career is otherwise obscure. The seal impression carries finger-prints from the time of its impression: an extraordinary point of contact between those handling this document today and the man or men who first attached and impressed its still warm wax seal, eight hundred years ago.

It is important to notice that we are most emphatically not stating that William of Wilton wrote either the Dean's charter relating to Warminster, or the Salisbury Magna Carta, written in a similar, or possibly even the same hand. It would have been most unusual for the scribe of a charter also to seal it. What is much more likely is that William of Wilton was the canon 'on duty' when the Warminster charter was issued, so that his countersealing of the document fits into a tradition of countersealing by such officers, recorded elsewhere in Salisbury capitular acts. Nonetheless, a name is inevitably sought, and William's is the only name, apart from that of the almost equally shadowy Dean Adam, that can be attached to the Warminster document. It can best be set down as a remote possibility that William not only sealed but wrote the Warminster deed. Stranger things have been known to happen. 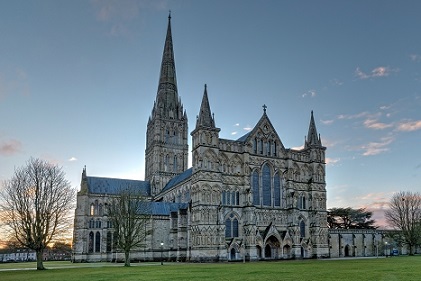 Salisbury Cathedral, whose translation from Old Sarum was initiated by Herbert Poer, and carried out in the early years of Henry III's reign by Richard Poer.

Sarum, in 1215, was a Cathedral church with a particular reason to celebrate the office of scribe. The Cathedral's bishop, Herbert Poer, and his brother, Master Richard, dean and subsequently bishop of Salisbury from 1217, were in all likelihood the sons of Richard Ilchester, bishop of Winchester. Bishop Richard had begun his career, as long ago as the 1140s or 50s, as a scribe, first in the household of earl William of Gloucester, later of that of King Henry II. Sarum was also a Cathedral whose bishop, dean and chapter were engaged in a self-conscious struggle to divorce themselves from the royal castle and settlement of Old Sarum, and to proclaim the division of divine from royal justice. It is therefore ironic that the Salisbury Magna Carta, in all likelihood produced in an episcopal or capitular milieu, should serve as so powerful a reminder of the extent to which, in 1215, bishops and barons, regnum and sacerdotium, remained almost indivisibly linked.

For those wishing to explore further here, the British Library's once in a lifetime exhibition, 'Magna Carta: Law, Liberty, Legacy', continues to the beginning of September. The Magna Carta Conference, hosted by the Magna Carta Project, at King's College London and the British Library, runs next week from Wednesday 17th through to Friday 19th June. A limited number of places are still available to those wishing to attend - please email magnacartaresearch@gmail.com to enquire.