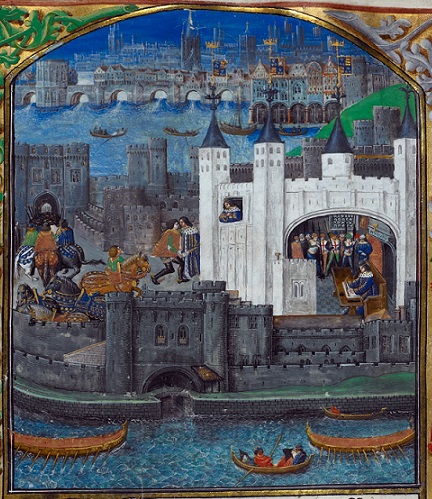 Having returned to the Tower of London from Kent, on Wednesday 18 March, the King set out for the Midlands en route for Nottingham. This was his first journey north of the Trent since September 1213, and his last before the outbreak of civil war. Only one charter is preserved for this week, issued at the Tower on 15 March, licensing Walter de Gray, bishop of Worcester, to assart (i.e. fell) his wood at Fladbury on the Worcestershire Avon. Amongst the usual run of royalist witnesses (Peter des Roches, William Brewer, Hugh de Neville, William de Cantiloupe) we find two Marcher lords, Walter de Lacy and Hugh de Mortimer, and the royal justices James of Potterne and Henry de Pont-Audemer. The presence of these latter suggests that the King and his court continued to hear pleas.1 Certainly, the Plea Roll for the Hilary term records business through to 8 March and possibly to the time of the King’s visit to Oxford in early April.2 The ongoing reconciliation with Walter de Lacy was marked by the release of further prisoners held since 1210 and the siege of Carrickfergus.3 On 15 March, Walter at last offered a fine to the King for the restoration of his lands in Ireland, delivering up charters apparently pledging his entire estate in England and Ireland as security.4 The fine itself was later set at 4000 marks, which may or may not accord with the sum, itself unrecorded, first offered by Walter on 15 March.5 At the same time, Walter was granted a forge in the Forest of Dean, a major centre of iron and charcoal production.6

Other gestures of reconciliation this week included the release of hostages. On 16 March, more than 30 of the Frenchmen (many of them from Boulogne) taken on the island of Sark in the previous autumn were released from captivity at Porchester, perhaps as a condition of the Anglo-French negotiations undertaken the week before.7 At Northampton, on 18 March, orders were issued for the release of two Welsh hostages, apparently in order to effect an exchange for Englishmen recently captured on the March.8 Betchworth, the site of a Clare family castle at Brockham in Surrey, was released by the sheriff of Kent to earl Richard de Clare, whilst William de Forz, the newly recognized count of Aumale, was restored to the manors of Cockermouth in Cumberland and Rockingham in Northamptonshire. Both of these manors were the sites of major castles, that at Rockingham claimed by Aumale in rivalry to another courtier, William Mauduit.9 If the intention here was to establish Aumale as a loyalist in the north and midlands, then his subsequent defection to the rebels demonstrated his essential untrustworthiness.10 Better calculated were the favours extended to William earl of Salisbury, newly released from captivity in France and now restored to custody of the royal manor at Geddington. His fishponds there were restocked by the King with100 live pike taken from the ponds of the vacant bishopric of Ely.11 Once again, we might note the crucial significance attached to Northamptonshire as a county straddling what was fast developing into a frontier between rebel and royalist zones of influence.

The King continued to simulate friendship for Stephen Langton, despite the ongoing negotiations in Rome where royal envoys were at precisely this time accusing the archbishop of complicity in rebellion. On 15 March, the constable of Dover was instructed to grant Langton custody of the port of Sandwich, a longstanding possession of the church of Canterbury, and one that with the reduction of fears of a French invasion the King perhaps at last felt sufficiently confident to release.12 On the following day, 16 March, Langton was promised protection for his liberties challenged by the abbot of St Albans.13 On the King’s progress northwards, letters of protection were granted to various monasteries (St Mary’s Southwark, St Mary de Pré near St Albans, Shelford Priory in Nottinghamshire).14 More controversially, on 16 March the King sent William Brewer and others to Ely, to discuss the possibility of promoting his chancellor, Master Richard Marsh, as bishop. Marsh was a man of far from blameless reputation, tarnished not least by his recent involvement in the election dispute at Bury St Edmunds.15 At the same time, Brewer was paid the Easter term of a massive £500 pension for the keeping of Dover Castle, and promised that the marrying off of an heiress, Galiena the daughter of William de Dammartin, would not be redound to his or his family's injury.16 This was one of two negotiations over marriages conducted this week. In the second case, another significant royal servant, Gilbert fitz Reinfrey, was in effect deprived of custody of an heiress for whom he had fined 20 marks, in order that the girl could be married off with the approval of her mother and friends.17 All of this suggests ongoing sensitivity to complaints against the King’s exploitation of his feudal rights.

Lest we suppose that the King was now in entirely reconciliatory mood, and despite the sending home of mercenaries from Poitou, others of his foreign captains continued to prosper. Thus the Fleming, Hugh de Boves, was permitted to fine for the lands of Hugh de Gournay.18 In a separate endeavour, perhaps intended to rebuild the King’s northern alliance against the potential threat from France, messages were sent, via a Hospitaller acting as go-between, both to Waleran of Limburg, count of Luxembourg, and to William count of Holland, inviting them to visit England to speak with the King.19 The very fact that the King himself chose to stay in London this week, not at the Temple or at his palace of Westminster, but within the safety of the Tower, perhaps tells us something significant about the city’s continued restlessness.