Throughout this week, the King remained at La Roche-aux-Moins.  His intention was presumably to draw the Capetian forces, now commanded by Louis son of Philip Augustus, south to the Loire, there to secure some sort of decisive engagement.  Meanwhile, John continued to dispose of lordships newly restored to him.  On Monday 23 June, he issued a charter announcing the homage of Geoffrey de Pouancé for the castle of Segré, 30 kilometres north of Angers, on the frontier between Anjou and Maine, theoretically, since 1201, assigned as dower to the King's sister-in-law Berengaria, widow of King Richard I.1 Geoffrey was also promised the restoration of his family lands and an annual rent of 100 marks to be assigned in Anjou or Poitou with the counsel of Ralph de Lusignan, count of Eu, and Pain de Rochefort, John's most significant ally on the Loire.2  That the arrangements of June 1214 were potentially controversial is suggested by the fact that on the same day, 23 June, John issued a second charter offering Segré and its castle to another Angevin baron, William de Guerche, with a clause allowing for compensation should the castle pass to anyone else.3  Here, in miniature, we encounter one cause of the distrust that John has continued to inspire, both amongst his contemporaries and within the community of modern scholars.  The families of Pouancé and Guerches were closely related.  Indeed, as we shall see, Geoffrey de Pouancé was in all likelihood William de Guerche's son.  The King's dealings over Segré could therefore have an innocent explanation.  Nonetheless it must remain a possibility that like many others of John's negotiations, these were duplicitous or, at best, open to a suspicion of double-dealing.  Nor does the trail of potential misunderstandings end there.  Thanks to the survival of the registers of Philip Augustus, we discover that at some time in the spring of 1214 William de Guerche and Geoffrey de Pouancé, his son, had produced a written undertaking never to abandon the fealty of the King of France or to league with the King of England, on pain of a forfeit of 5000 livres tournois.  This was guaranteed by a series of pledges supplied by major Angevin barons including Ralph vicomte of Beaumont and Aimery de Craon.4  In other words, duplicity and double-dealing were hard-wired throughout the progress of John's campaign, both in the royalist and in the baronial camps. 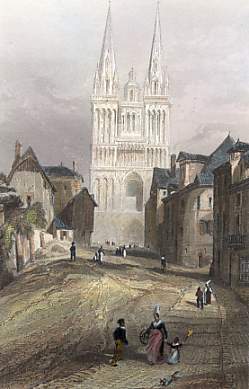 On 25 June, the great feast day of St John the Baptist, disposing of a high ecclesiastical office that had previously been held by Peter des Roches (now bishop of Winchester and the King's vice-regent and justiciar in England), John bestowed the deanery of the collegiate church of Saint-Martin at Angers upon William de Saint-Maixent, himself a leading member of Des Roches' household.5  A day earlier, the Cathedral Church of Saint-Maurice at Angers had been promised the restoration of its lands in England, previously confiscated as those of an ally of the French.6  There were also favours for servants of Hugh de Lusignan, count of La Marche, and of Ralph de Lusignan, count of Eu.7  Most significantly, on 25 June the King issued a charter for Fulk Painel, promising him the remission of 'all ire, rancor, indignation and malevolence' that had previously arisen against him, the restoration of land held from the King in England, confirmation for all his lands in Normandy, and marriage for his eldest son to a daughter of Ralph Tesson.8  This signalled the first significant approach to John's court by the aristocracy of Normandy, since 1204 severed from English rule.  As the first of what John clearly hoped would be a stream of defections by Norman landholders from the Capetian to the Plantagenet camp, it gave hope that John's campaign north of the Loire would prosper as well as his campaign in the south.

Fulk Painel was perhaps not the only Norman baron to approach John at this time.  A few months later, on his return to England, the King deposited a series of treuga or truces in his archive.  One such was sealed by Fulk Painel.  Others by John and William de Préaux, Richard de Harcourt, Robert de Thibouville and William du Hommet, all of them amongst the greater men of Normandy.9  There is at least a possibility that these were undertaking negotiated in the summer of 1214, rendered obsolete by subsequent events.

On 23 June, the King had issued letters of protection for the great abbey of Marmoutier, 100 kilometres further up the Loire, just outside Tours.  At this stage, it was perhaps Tours that John expected to be next city to tumble.10   On the same day (23 June), the King wrote to Hubert de Burgh asking that he send him ten pounds of sulphur, ten pounds of tallow (sepum), ten pounds each of tar and pitch (gemma and pica), and four pounds of quicksilver (argentum vivum).  If these were not in store, then Hubert was to acquire them with all haste.11  The purpose of these supplies remains obscure, perhaps medical, perhaps military (mercury being used in gilding metal objects such as weapons, as well as in the treatment of skin diseases).  In all events, John's military prospects remained at this stage highly optimistic.