As part of the anniversary celebrations of Magna Carta, the Magna Carta Project was asked to contribute a guest article to the website of Christ's College Cambridge. The intention was to spotlight an original charter of King John, still in the College's possession. What follows represents an abbreviated form of this post.1 It is rehearsed here, since the connections brought to light via the Christ's College charter are in fact of considerable significance in the wider history of relations between the barons who went to war with King John in 1215.

The charter in question, text supplied below, confirms a grant made to Gilbert Peche of land and service in Bourn, seven miles to the west of Cambridge, whose castle and barony had originally been created for Picot, William the Conqueror's avaricious sheriff of Cambridgeshire.2 As a result of conspiracy by Picot's son against King Henry I, the barony was confiscated. Granted to the Peverel family, and following the disappearance of William Peverel on the Second Crusade, after 1147, it then underwent a complicated division amongst female co-heiresses. One of these, Matilda or 'Maud', married Hugh of Dover (d.1172). Another, Alice, married Hamo Peche (d.c.1180). Maud died in 1185, whereafter a large part of her estate passed, via a niece, to the Trussebut family and thence to Robert de Ros (d.1226), lord of Hemsley in the North Riding of Yorkshire.

In the surrounding confusion, an interest in Maud's estate was transmitted, by means unknown, to Hugh de Longchamps, a French adventurer from the region of the Beauvaisis, north of Paris. Hugh's uncle, William Longchamps, bishop of Ely, was royal chancellor and, during the early 1190s, whilst King Richard 'the Lionheart' was crusading in the Holy Land and then imprisoned in Germany, controversial regent over England. Following the loss of Normandy in 1204, Hugh sided with the French, so that his lands in England reverted to the crown. The purpose of King John's charter, now in the Christ's Archive, was to confirm to Gilbert Peche (d.1212), younger son of Hamo Peche, the portion of Bourn together with the service of knight's fees in Wimpole and Rampton that Hugh de Longchamps had previously held.3

The charter is known both from the sealed original now in Christ's, and from a copy in the Charter Roll of the royal chancery, today preserved in the National Archives at Kew.4 Gilbert Peche was obliged to pay the King 100 marks (£66 13s. 4d.) for his charter.5 Previously, only the chancery copy of the charter has been noticed by historians. Yet the Christ's original discloses several details that were omitted from the official copy. It thus supplies a full text of the charter's address (shown below in bold), and most significantly, at the end of the witness list, the names of five witnesses omitted, as a space saving device, from the chancery copy. From its handwriting, we can identify the Christ's charter as the work of a particularly prolific scribe who wrote many others of King John's charters from roughly 1200 to 1209.6 This is interesting and helps us to explore the inner workings of the King's bureaucracy. In more specific terms, the fine of 100 marks paid by Gilbert Peche for his land at Bourn is a reminder both of King John's loss of Normandy (in many ways, the greatest of the King's failings), and of the rapacious financial exactions against his barons that the King hoped might one day pay for reconquest. From the collapse of these hopes, and the bitterness of the barons, emerged the rebellion of 1215. By 1215, Gilbert Peche himself was dead. But his son, Hamo Peche, lord of Bourn, undoubtedly joined the rebellion. In March 1216, King John commanded the confiscation of Hamo's estate.7 Hamo did not return to the King's fealty until the end of the civil war, in October 1217, being restored to land in Essex, Kent and East Anglia.8

A decade before this, Gilbert Peche's charter had been witnessed by thirteen courtiers. Of these, six were dead by 1215. Six of the remaining seven were suspected of participation in the rebellion of 1215-17, the defection of so many of the King's close companions supplying significant proof of the extent of baronial discontent.9 No less than four of the witnesses to our charter (Robert fitz Walter, Gilbert of Clare, Geoffrey de Say and William of Huntingfield), were numbered amongst the twenty-five barons entrusted at Runnymede with the enforcement of Magna Carta.10

All four held estates principally in East Anglia or Essex. All four were related within three or four degrees of kinship to the chief rebel leader in East Anglia, Robert fitz Walter, lord of Dunmow in Essex, who himself held property at Bourn, by right of his late wife, Gunnora de Valognes.11 As we have seen, land at Bourn was also held by Robert de Ros of Helmsley, another member of the baronial twenty-five, coheir to the Peverel barony and a crucial link between the rebels of East Anglia and those of Yorkshire and the North. In other words, even in our relatively obscure part of west Cambridgeshire we find a nexus of personalities and landholding linking many of the men most prominent in resisting King John.

Our charter from Cambridge thus has much to teach us about the events of 1215, not least as a reminder of the extent to which it was the kinship network and landholding of Robert fitz Walter that first brought a majority of the rebel barons into conjunction.12 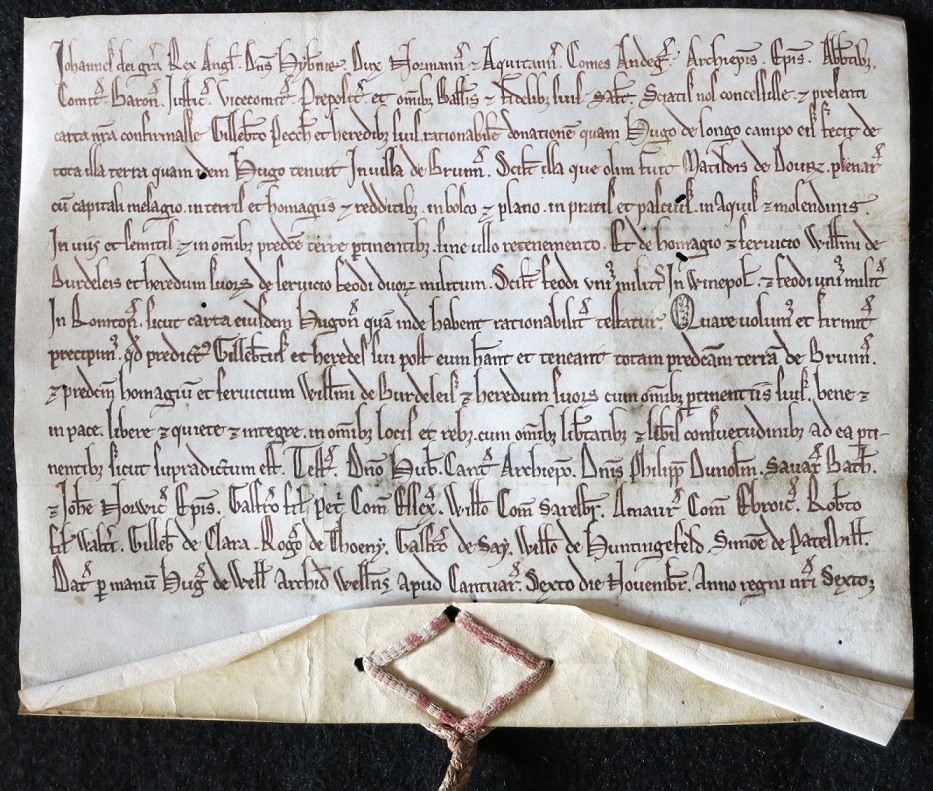 Notification by King John of his confirmation to Gilbert Peche of the grant made by Hugh de Longchamp of the land, that once belonged to Matilda of Dover, that Hugh held in Bourn, and of the homage and service of two knights' fees in Wimpole and Rampton (Cambridgeshire).     Canterbury, 6 November 1204

John, by God's grace King of England, lord of Ireland, duke of Normandy and Aquitaine and count of Anjou, sends greetings to all his archbishops, bishops, abbots, earls, barons, justices, sheriffs, reeves and all bailiffs and faithful men. Know that we have granted and by this our present charter confirmed to Gilbert Peche and his heirs the reasonable gift that Hugh de Longchamp made to them of the whole of that land which Hugh held in the vill of Bourn, namely that which once belonged to Maud of Dover, to hold fully, with its chief messuage, in lands and homages and rents, in woods and field, in meadows and feedings, in waters and mills, in ways and arable and in all things pertaining to that land without any thing retained, together with the homage and service of William de Burdeleis and his heirs for two knights' fees, one in Wimpole and the other in Rampton, just as is reasonably set out in Hugh's charter granted to Gilbert and his heirs.  Whereby we wish and firmly command that the aforesaid Gilbert and his heirs after him have and hold the aforesaid land of Bourn and the homage and service of William de Burdeleis and his heirs with all their appurtenances, well and in peace, freely and quitly and fully, in all places and things with all liberties and free customs pertaining to them, as is set out above. Witnessed by the lord Hubert (Walter) archbishop of Canterbury, the lords Philip (of Poitiers) bishop of Durham, Savaric bishop of Bath and John (de Gray) bishop of Norwich, Geoffrey fitz Peter earl of Essex, William (Longespée) earl of Salisbury, Aimery (de Montfort) count of Evreux, Robert fitz Walter, Gilbert de Clare, Roger de Tosny, Geoffrey de Say, William of Huntingfield, Simon of Pattishall. Given by the hand of Hugh of Wells, archdeacon of Wells, at Canterbury on the sixth day of November in the sixth year of our reign.

John moves towards Pontefract (The Itinerary of King John)